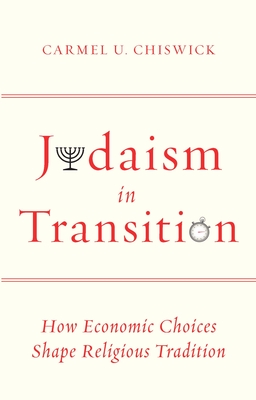 By Carmel U. Chiswick

At the core of Judaism stands a body of traditions that have remained consistent over millennia. Yet, the practice of these rituals has varied widely across historical and cultural contexts. In Judaism in Transition, Carmel U. Chiswick draws on her Jewish upbringing, her journey as a Jewish parent, and her perspective as an economist to consider how incentives affect the ways that mainstream American Jews have navigated and continue to manage the conflicting demands of everyday life and religious observance. Arguing that economics is a blind spot in our understanding of religion, Chiswick blends her personal experiences with economic analysis to illustrate the cost of Jewish participation--financially and, more importantly, in terms of time and effort.

The history of American Jews is almost always told as a success story in the secular world. Chiswick recasts this story as one of innovation in order to maintain a distinctive Jewish culture while keeping pace with the steady march of American life. She shows how tradeoffs, often made on an individual and deeply personal level, produce the brand of Judaism which predominates in America today. Along the way, Chiswick explores salient and controversial topics--from intermarriage to immigration and from egalitarianism to connections with Israel.

At once a portrait of American Jewish culture and a work that outlines how economic decisions affect religion, Judaism in Transition shows how changes in our economic environment will affect the Jewish community for decades to come.

Carmel U. Chiswick is Research Professor of Economics at George Washington University. A founding member of the Association for the Study of Religion, Economics, and Culture and a former officer of the Association for the Social-Scientific Study of Jewry, she has written extensively on the economics of religion and has been a consultant to organizations in the United States and Israel.