The Unheard: A Memoir of Deafness and Africa (Paperback) 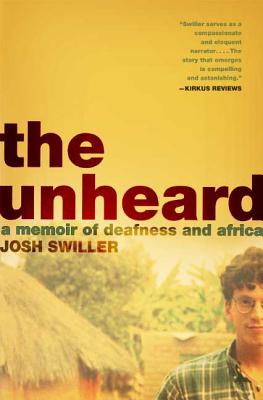 The Unheard: A Memoir of Deafness and Africa (Paperback)

These are hearing aids. They take the sounds of the world and amplify them." Josh Swiller recited this speech to himself on the day he arrived in Mununga, a dusty village on the shores of Lake Mweru. Deaf since a young age, Swiller spent his formative years in frustrated limbo on the sidelines of the hearing world, encouraged by his family to use lipreading and the strident approximations of hearing aids to blend in. It didn't work. So he decided to ditch the well-trodden path after college, setting out to find a place so far removed that his deafness would become irrelevant.

That place turned out to be Zambia, where Swiller worked as a Peace Corps volunteer for two years. There he would encounter a world where violence, disease, and poverty were the mundane facts of life. But despite the culture shock, Swiller finally commanded attention—everyone always listened carefully to the white man, even if they didn't always follow his instruction. Spending his days working in the health clinic with Augustine Jere, a chubby, world-weary chess aficionado and a steadfast friend, Swiller had finally found, he believed, a place where his deafness didn't interfere, a place he could call home. Until, that is, a nightmarish incident blasted away his newfound convictions.

At once a poignant account of friendship through adversity, a hilarious comedy of errors, and a gripping narrative of escalating violence, The Unheard is an unforgettable story from a noteworthy new talent.

A graduate of Yale University, Josh Swiller has had a wide variety of careers: forest ranger, carpenter, slipper salesman, raw food chef, Zen monk, journalist, and teacher, among other things. In August 2005, he had successful surgery for a cochlear implant and partially recovered his hearing. Swiller now speaks often on issues facing mainstreamed deaf individuals, and works at a hospice in Brooklyn, New York, where he lives. He is the author of The Unheard: A Memoir of Deafness and Africa.

“I thought I knew about the Peace Corps until I read Josh Swiller's hilarious, troubling, and at times frightening recreation of his time in Zambia. His wit spares no one--least of all himself--and his generosity of spirit encompasses nearly everyone. His experiences in Africa transformed him, and this book will transform readers.” —Laurence Bergreen, author of Over the Edge of the World: Magellan's Terrifying Circumnavigation of the Globe

“I was riveted by this book from page one. Swiller shouldn't have lived to tell this tale, much less been sent to a village in deepest Africa that the locals called 'Gomorrah.' But he did, and he's returned with something priceless: a story suffused with humor and love about a place where corruption and death were regular visitors. Swiller hears the rhythms of language and life far better than most people with two normal ears.” —Michael Chorost, author of Rebuilt: How Becoming Part Computer Made Me More Human

“As my mother used to say, ‘You got your listening ears on, bub?' This is not gimp chic, nor misery memoir, but a book as deserving, funny and brave as a deaf man digging wells in hardest Africa. Hoo boy. And I thought being blind at the bus depot was harrowing. Yeesh.” —Ryan Knighton, author of Cockeyed: A Memoir

“Josh Swiller was 22 and profoundly deaf when he applied to the Peace Corps in search of adventure. And indeed, adventure he found. His experiences in Zambia are eloquently recounted in his hard-to-put-down memoir of deafness and Africa, 'The Unheard'.” —The New York Times, Health section

“Several ingredients are crucial in a memoir like this: humor, the ability to see enough details to make the scene come alive and a dispassionate compassion. Swiller has them all.” —Los Angeles Times

“[Swiller's] appealing, intelligent narrative serves both as a coming of age story and as a penetrating light into one corner of a tormented continent.” —Washington Post

“Josh Swiller rewrites the familiar African narrative with a purity that makes the tragic beauty of that devastated continent a stunning novelty for readers. We experience the rich, tangible passions of love, honor and revenge in Africa, amplified a thousandfold in the quiet world of the deaf.” —New York Observer