The Emperor of Mars (Secrets of the Dragon Tomb #2) (Hardcover) 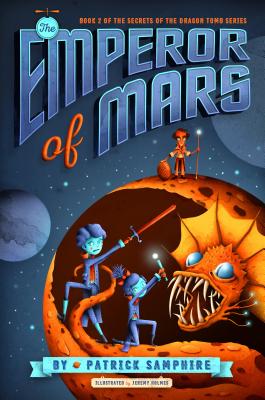 The Emperor of Mars (Secrets of the Dragon Tomb #2) (Hardcover)

A missing Martian. A sinister plot. A Napoleonic spy. . . Boundless adventures await in Book 2 of The Secrets of the Dragon Tomb middle grade sci-fi series!

If Edward thought life was going to be easy in Lunae City, he was very, very wrong. The moment he intercepts a thief escaping from Lady Harleston’s town house, he is caught in a terrible scheme that threatens all of Mars. Soon he’s fighting off vicious sea serpents, battling a small army of heavily armored thugs, and trying to unpick an impossible mystery. Edward doesn’t know whom he can trust. Will he make the right choice? Or will his family—and his entire planet—fall victim to the treacherous Emperor of Mars?

Patrick Samphire grew up in England and Zambia. He holds a PhD in physics from the University of Essex and attended the Clarion Writers Workshop in Seattle. He lives in Wales with his family. Secrets of the Dragon Tomb was his debut novel.

Jeremy Holmes is the creative mind behind Mutt Ink, a graphic design studio, and the illustrator of many children's books. His first book, There Was an Old Lady, was awarded Bologna Razzi’s Opera Prima award at the 2010 Bologna Book Fair. He lives in Pennsylvania.
"As in the first installment, there is plenty of action; readers will encounter saber-toothed spiders and shark kites, as well as sea serpents, mechanical scorpions, and the dreaded Apprentice. . . This fast-paced sequel exploring deep topics of power, corruption, family, and identity will find a broad audience."--School Library Journal