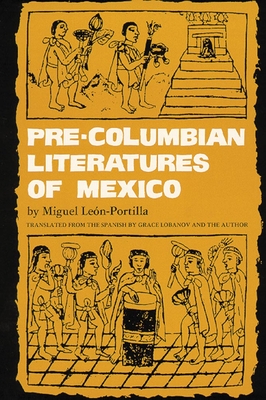 
Available in Warehouse. Wait for Email Confirmation for ETA
Volume 92 in the Civilization of the American Indian Series. This volume presents ancient Mexican myths and sacred hymns, lyric poetry, rituals, drama, and various forms of prose, accompanied by informed criticism and comment. The selections come from the Aztecs, the Mayas, the Mixtecs and Zapotecs of Oaxaca, the Tarascans of Michoacan, the Otom's of central Mexico, and others. They have come down to us from inscriptions on stone, the codices, and accounts written, after the coming of Europeans, of oral traditions. It is Miguel Le n-Portilla's intention "to bring to contemporary readers an understanding of the marvelous world of symbolism which is the very substance of these early literatures." That he has succeeded is obvious to every reader. Miguel Le n-Port lla is Professor Emeritus of the Institute of Historical Research at the National University of Mexico. He is the author of Aztec Thought and Culture, Fifteen Poets of the Aztec World, and over thirty other books on Mexico and Central American Indians.