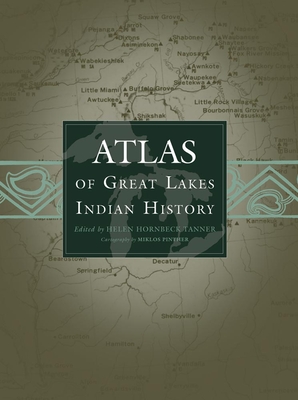 The Indian history of the Great Lakes region of the United States and Canada, and particularly of the Ohio Valley, is so complex that it can be properly clarified only with the visual aid of maps. The Atlas of Great Lakes Indian History, in a sequence of thirty-three newly researched maps printed in as many as five colors, graphically displays the movement of Indian communities from 1640 to about 1871, when treaty making between Indian tribes and the United States government came to an end.

History was shaped in this part of North America by intertribal warfare, refugee movements, epidemics of European-introduced diseases, French and English wars and trade rivalry, white population advances, Indian resistance, Indian treaties deeding land to state and national governments, and imperfect arrangements for reservations, removal, and allotment of land. The changing pattern of Indian village locations as a result of all these factors is shown on the maps. Each map is highlighted by accompanying text, written as if the author were pointing out specific places on the map. Eighty-one illustrations convey a realistic impression of the land and its people.