Where Custer Fell: Photographs of the Little Bighorn Battlefield Then and Now (Paperback) 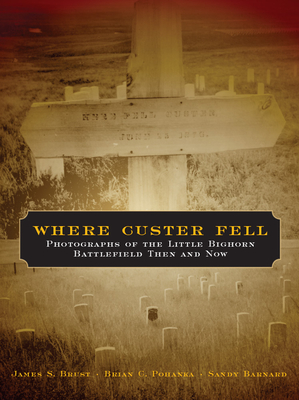 Where Custer Fell: Photographs of the Little Bighorn Battlefield Then and Now (Paperback)

The Battle of the Little Bighorn has long held an eminent position among the chronicles of the mythic West. None of the men who rode with Lieutenant Colonel George Armstrong Custer to his "Last Stand" survived to tell the tale, but this stunning photography book provides a view of the battlefield as it must have existed in 1876.

To create Where Custer Fell, authors James S. Brust, Brian C. Pohanka, and Sandy Barnard searched for elusive documents and photographs, made countless trips to the battlefield, and scrutinized all available sources. Each chapter begins with a concise, lively description of an episode in the battle. The narratives are graphically illustrated by historical photos, which are presented alongside modern photos of the same location on the battlefield. The book also features detailed maps and photographs of battle participants and the early photographers who attempted to tell their story.