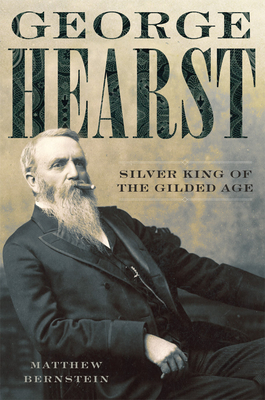 Rising from a Missouri boyhood and meager prospecting success to owning the most productive copper, silver, and gold mines in the world and being elected a United States senator, George Hearst (1820-91) spent decades veering between the heights of prosperity and the depths of financial ruin. In George Hearst: Silver King of the Gilded Age, Matthew Bernstein captures Hearst's ascent, casting light on his actions during the Civil War, his tempestuous marriage to his cousin Phoebe, his role as disciplinarian and doting father to future media magnate William Randolph Hearst, and his devious methods of building the greatest mining empire in the West.

Whether driving a pack of mules laden with silver from the Comstock Lode to San Francisco, bribing jurors in Pioche and Deadwood, or unearthing bonanzas in Utah and Montana Territories, Hearst's cunning, energy, and industry were always evident, along with occasional glimmers of the villainy ascribed to him in the television series Deadwood.

In this first full-length biography, George Hearst emerges in all his human dimensions and historical significance-an ambitious, complex, flawed, and quintessentially American character.