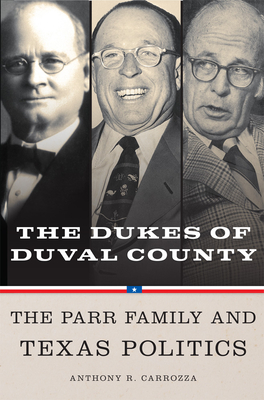 The notorious Parr family manipulated local politics in South Texas for decades. Archie Parr, his son George, and his grandson Archer relied on violence and corruption to deliver the votes that propelled their chosen candidates to office. The influence of the Parr political machine peaked during the 1948 senatorial primary, when election officials found the infamous Ballot Box 13 six days after the polls closed. That box provided a slim eighty-seven-vote lead to Lyndon B. Johnson, initiating the national political career of the future U.S. president.

Dukes of Duval County begins with Archie Parr's organization of the Mexican American electorate into a potent voting bloc, which marked the beginning of his three-decade campaign for control of every political office in Duval County and the surrounding area. Archie's son George, who expanded the Parrs' dominion to include jobs, welfare payments, and public works, became a county judge thanks to his father's influence-but when George was arrested and imprisoned for accepting payoffs, only a presidential pardon advocated by then-congressman Lyndon Johnson allowed George to take office once more. Further legal misadventures haunted George and his successor, Archer, but in the end it took the combined force of local, state, and federal governments and the courageous efforts of private citizens to overthrow the Parr family.

In this first comprehensive study of the Parr family's political activities, Anthony R. Carrozza reveals the innermost workings of the Parr dynasty, a political machine that drove South Texas politics for more than seventy years and critically influenced the course of the nation.