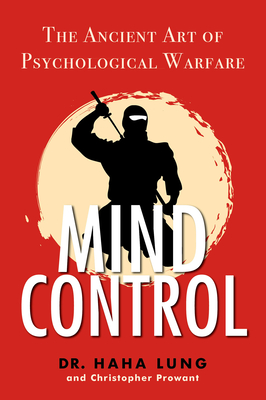 
Available in Warehouse. Wait for Email Confirmation for ETA
Presenting readers with the most effective techniques for mind control, bestselling martial arts expert and scholar Dr. Haha Lung's Mind Control is the cult-classic guide to breaching an opponent's mental defenses by using his fears, insecurities, hopes, and beliefs against him.

Buddha said, "Your greatest weapon is your enemy's mind." Crucial to victory in any battle is psychological warfare, a technique employed and perfected by history's greatest military thinkers, such as Sun Tzu, Yoritomo, and Musashi of Japan; and several lesser-known but incredibly influential masterminds.

Dr. Haha Lung, author of more than a dozen books on martial arts, presents an all-in-one primer to breaching your enemy's mental defenses. Building on the techniques he presented in the classic Mind Manipulation, he shows how to use your enemy's fears, insecurities, hopes, and beliefs against him. Some of the most effective mind control techniques are from forgotten masters of the trade, and are featured here for the very first time:

•  Dark Arts: the art of intimidation
•  The Secret of Seven: the Seven Wheels of Power
•  Masters of the East: Including the Craft of the Hircarrah, Vietnamese voodoo
•  Chinese Face: the art of K'ung Ming and Chinese face-reading
•  Samurai Sly: Yoritomo's Art of Influence; the Way of No-Sword; Shadow Warriors.
•  Blood of Abraham: Biblical black science<
Dr. Haha Lung is the author of more than a dozen books on martial arts, including Mind Penetration, Mind Fist, The Nine Halls of Death, Assassin!, Mind Manipulation, Knights of Darkness, Mind Control: The Ancient Art of Psychological Warfare, The Lost Fighting Arts of Vietnam, and with co-author Christopher B. Prowant, Mind Assassins, Ninja Shadowland, and Mental Dominance.