Acts of Faith: The Story of an American Muslim, in the Struggle for the Soul of a Generation (Paperback) 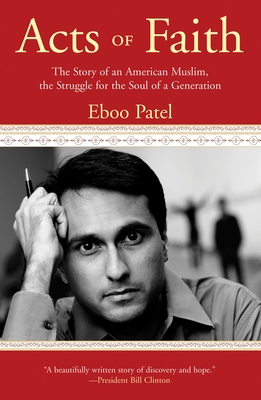 Acts of Faith: The Story of an American Muslim, in the Struggle for the Soul of a Generation (Paperback)

With a new afterword

Acts of Faith is a remarkable account of growing up Muslim in America and coming to believe in religious pluralism, from one of the most prominent faith leaders in the United States. Eboo Patel’s story is a hopeful and moving testament to the power and passion of young people—and of the world-changing potential of an interfaith youth movement.

Eboo Patel is founder and executive director of the Interfaith Youth Core, a Chicago-based international nonprofit building the interfaith youth movement. He is a regular contributor to the Washington Post, National Public Radio, and CNN. Named one of America’s Best Leaders by U.S. News & World Report, he was appointed by President Obama to the Advisory Council of the White House Office of Faith-Based and Neighborhood Partnerships. Acts of Faith is the 2010 recipient of the prestigious Grawemeyer Award in Religion.
“A beautifully written story of discovery and hope.”
—President Bill Clinton

“[A] visionary book, part coming-of-age memoir and part call-to-action . . . A shining vision of the possibilities of interfaith cooperation and pluralistic discourse.”
—Adam Mansbach, The Boston Globe

“Remarkable . . . A well-written, compelling testimony to how one man is trying to ensure that different religions can live side by side in peace.”
—Paul Raushenbush, Beliefnet.com

“Eboo Patel is an exciting new voice of a new America: diverse but not divisive, hopeful but not utopian. He speaks for all of us from a rising generation of bright, brown, and bold Americans who have much to offer a country embarking on a new millennium and in need of new blood.”
—Shaykh Hamza Yusuf, executive director of the Zaytuna Institute