Sacred Ground: Pluralism, Prejudice, and the Promise of America (Hardcover) 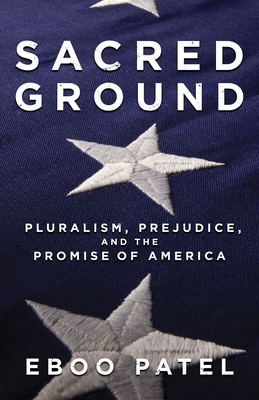 Sacred Ground: Pluralism, Prejudice, and the Promise of America (Hardcover)

A “thought-provoking, myth-smashing” exploration of American identity and a passionate call for a more tolerant, interfaith America (Madeleine Albright, former Secretary of State)

There is no better time to stand up for your values than when they are under attack. Alarmist, hateful rhetoric once relegated to the fringes of political discourse has now become frighteningly mainstream, with pundits and politicians routinely invoking the specter of Islam as a menacing, deeply anti-American force.

In Sacred Ground, author and renowned interfaith leader Eboo Patel says this prejudice is not just a problem for Muslims but a challenge to the very idea of America. Patel shows us that Americans from George Washington to Martin Luther King Jr. have been “interfaith leaders,” illustrating how the forces of pluralism in America have time and again defeated the forces of prejudice. And now a new generation needs to rise up and confront the anti-Muslim prejudice of our era. To this end, Patel offers a primer in the art and science of interfaith work, bringing to life the growing body of research on how faith can be a bridge of cooperation rather than a barrier of division and sharing stories from the frontlines of interfaith activism.

Patel asks us to share in his vision of a better America—a robustly pluralistic country in which our commonalities are more important than our differences, and in which difference enriches, rather than threatens, our religious traditions. Pluralism, Patel boldly argues, is at the heart of the American project, and this visionary book will inspire Americans of all faiths to make this country a place where diverse traditions can thrive side by side.

Named “one of America’s best leaders” by U.S. News and World Report, Eboo Patel is Founder and President of Interfaith America, the leading interfaith organization in the United States. Under his leadership, Interfaith America has worked with governments, universities, private companies, and civic organizations to make faith a bridge of cooperation rather than a barrier of division. Eboo served on President Obama’s Inaugural Faith Council, has given hundreds of keynote addresses, and has written five books. He is an Ashoka Fellow and holds a doctorate in the sociology of religion from Oxford University, where he studied on a Rhodes scholarship. Eboo lives in Chicago with his wife, Shehnaz, and their two sons.

“Eboo Patel is a remarkable young man with the wisdom to seek truth and the courage to speak it. One of America’s foremost advocates and practitioners of interfaith understanding, he has written a book that combines timely social commentary with compelling history and a wealth of personal anecdotes. Sacred Ground is a refreshing, thought-provoking, myth-smashing, and deeply patriotic exploration of American identity and ideals.”
—Former Secretary of State Madeleine Albright

“Sacred Ground is simultaneously a chronicle of religious tensions in post-9/11 America and an account of how to create, through trial and error and critical self-reflection, the most successful interfaith movement in the country.  Patel probes like a professor, inspires like a preacher, and writes like a poet.  I really loved this book; it is a tale that is truly hard to put down.”
—Robert D. Putnam, author of American Grace

“Interfaith cooperation is one of America’s founding ideals. It still sets us apart from much of the world. Eboo Patel has lived that value and, in this book, spreads that good word. Uplifting and invaluable, Sacred Ground is essential reading for our polarized era.”
—Walter Isaacson, author of Steve Jobs and Benjamin Franklin

“Eboo Patel has been a transformative force in our young and tumultuous century. And he has an utterly original experience of what robust religious identity can mean in modern lives. With this book, he opens the idea of ‘inter-faith’ into a vision of America that is practically informative, refreshingly challenging, and full of hope.”
—Krista Tippett, host of public radio’s On Being

“At a time when ignorance and suspicion are holding us back from building true community with our neighbors, Eboo Patel offers a light in the darkness. He challenges the bigotry and intolerance that is seeping into our political rhetoric, reminding us that America is a country built on the pillars of pluralism and tolerance. In both Sacred Ground and his wonderful interfaith work, Eboo offers an opportunity for us to move to higher ground in our relationships with our Muslim brothers and sisters, and to play our part in building a ‘beloved community for all people,’ both in the United States, and around the world.”
—Rev. Jim Wallis, author of God’s Politics

“Patel, founder of the Interfaith Youth Core, lets his love for his work and his country shine through in this brief but charming introduction to the importance of interfaith work in America… [H]is expertise and blend of compelling personal anecdotes with researched argumentation makes this work an accessible and inspiring introduction to the meaning and practice of pluralism.”
—Publishers Weekly