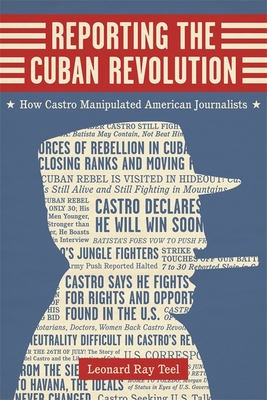 Reporting the Cuban Revolution reveals the untold story of thirteen American journalists in Cuba whose stories about Fidel Castro's revolution changed the way Americans viewed the conflict and altered U.S. foreign policy in Castro's favor.
Between 1956 and 1959, the thirteen correspondents worked underground in Cuba, evading the repressive censorship of Fulgencio Batista's dictatorship in order to report on the rebellion led by Fidel Castro. The journalists' stories appeared in major newspapers and magazines and on national television and radio, influencing Congress to abruptly cut off shipments of arms to Batista in 1958. Castro was so appreciative of the journalists' efforts to publicize his rebellion that on his first visit to the United States as premier of Cuba, he invited the reporters to a private reception at the Cuban Embassy in Washington, where he presented them with engraved gold medals. While the medals revealed Castro's perception of the correspondents as like-minded partisans, the journalists themselves had no such intentions. Some had journeyed to Cuba in pursuit of scoops that could rejuvenate or jump-start their careers; others sought to promote press freedom in Latin America; still others were simply carrying out assignments from their editors. Bringing to light the disparate motives and experiences of the thirteen journalists who reported on this crucial period in Cuba's history, Reporting the Cuban Revolution is both a masterwork of narrative nonfiction and a deft analysis of the tension between propaganda and objectivity in the work of American foreign correspondents.

Leonard Ray Teel is professor emeritus of communication at Georgia State University in Atlanta and the 2014 recipient of the Sidney Kobre Lifetime Achievement Award from the American Journalism Historians Association.