The Biology of Horror: Gothic Literature and Film (Paperback) 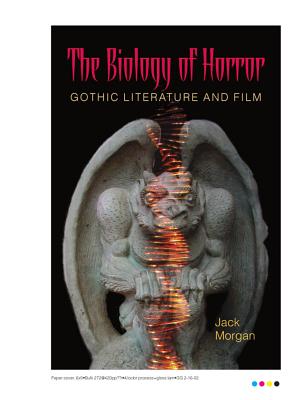 The Biology of Horror: Gothic Literature and Film (Paperback)

Unearthing the fearful flesh and sinful skins at the heart of gothic horror, Jack Morgan rends the genre’s biological core from its oft-discussed psychological elements and argues for a more transhistorical conception of the gothic, one negatively related to comedy. The Biology of Horror: Gothic Literature and Film dissects popular examples from the gothic literary and cinematic canon, exposing the inverted comic paradigm within each text.

Morgan’s study begins with an extensive treatment of comedy as theoretically conceived by Suzanne Langer, C. L. Barber, and Mikhail Bakhtin. Then, Morgan analyzes the physical and mythological nature of horror in inverted comic terms, identifying a biologically grounded mythos of horror. Motifs such as sinister loci, languishment, masquerade, and subversion of sensual perception are contextualized here as embedded in an organic reality, resonating with biological motives and consequences. Morgan also devotes a chapter to the migration of the gothic tradition into American horror, emphasizing the body as horror’s essential place in American gothic.

Morganconcludes his physical examination of the Gothic reality with a consideration born of Julia Kristeva’s theoretical rubric which addresses horror’s existential and cultural significance, its lasting fascination, and its uncanny positive—and often therapeutic—direction in literature and film.

Jack Morgan teaches in the English department at the University of Missouri-Rolla. He has published widely in American and Irish literature and is the coeditor, with Louis A. Renza, of The Irish Stories of Sarah Orne Jewett (also available from Southern Illinois University Press).

“The Biology of Horror does something I’ve not seen in over twenty-five years of working on and with the Gothic: it builds a biological model of the Gothic, a model that reveals a dark inversion of comic regeneration. Using the work of Suzanne Langer and Mikhail Bakhtin as the theoretical poles of this new model, Morgan uses his reconfigured Gothic paradigm to deconstruct various literary and cinematic emblems of humanity’s innate fear of its own organic vulnerability and fleshly brevity.”—Mary Pharr, coeditor of The Blood Is the Life: Vampires in Literature

“Jack Morgan’s The Biology of Horroroffers a tantalizingly organic reinterpretation of the form and function of horror literature, emphasizing its close and too-often neglected relationship to comedy. An eminently readable and insightful book, The Biology of Horroris a must for both scholars and general readers interested in the history and deeper significance of the gothic.”

—Caitlin Kiernan, author of Threshold: A Novel of Deep Time