The Philosophy of Hegel as a Doctrine of the Concreteness of God and Humanity: Volume One: The Doctrine of God (Topics In Historical Philosophy #1) (Abridged / Paperback) 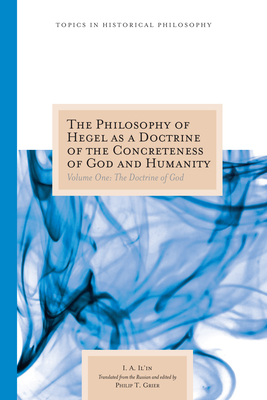 The Philosophy of Hegel as a Doctrine of the Concreteness of God and Humanity: Volume One: The Doctrine of God (Topics In Historical Philosophy #1) (Abridged / Paperback)

This landmark two-volume translation from Russian of The Philosophy of Hegel as a Doctrine of the Concreteness of God and Humanity marks the first appearance in English of any of the works of Russian philosopher Ivan Aleksandrovich Il’in (Ilyin). Originally published in 1918, on the eve of the Russian civil war, Il'in's commentary on Hegel marked both an apogee of Russian Silver Age philosophy and a significant manifestation of the resurgence of interest in Hegel that began in the early twentieth century.

A. F. Losev accurately observed in the same year it appeared: “Neither the study of Hegel nor the study of contemporary Russian philosophical thought is any longer thinkable without this book of I. A. Il’in’s.” Some Hegel scholars may know this work through the abridged translation into German that Il’in produced himself in 1946. However, that edition omitted most of the original volume two. Noted Hegel scholar Philip T. Grier’s edition—with an introduction setting Il’in’s work in its proper historical, cultural, and philosophical contexts and annotation throughout—represents the first opportunity for non-Russian-speaking readers to acquaint themselves with the full scope of Il’in’s still provocative interpretation of Hegel.

I. A. Il’in (1883–1954) was born in Moscow and educated in the Faculty of Law of Moscow University. He served as head of the Psychological Society of Moscow from 1920 to 1922, when the society was disbanded and he, along with many other “irreconcilable” anti-Bolshevik intellectuals, were arrested, condemned to execution, and then forcibly exiled. He taught at the Russian Academic Institute in Berlin until forced out by the Nazis in 1934. Il’in escaped to Switzerland in 1938, where he resided until his death in 1954.

Philip T. Grier is Thomas Bowman Professor of Philosophy and Religion at Dickinson College. He is author of Marxist Ethical Theory in the Soviet Union and the editor of Identity and Difference: Studies in Hegel’s Logic, Philosophy of Spirit, and Politics (2007). He is a past president of the Hegel Society of America.

"Philip Grier has done the English-speaking philosophical community a great service in making this rich commentary available to us." —Notre Dame Philosophical Reviews

“Grier’s masterful translation brings into a view a seminal work by the Russian religious philosopher and publicist Ivan A. Il’in. Anglo-American readers will benefit from the clarity and eloquence of the translation, supported by a thorough documentation in form of translator’s notes, detailed bibliography, and trilingual glossary. This is a highly valuable publication, and it should become a major reference point in the field.” —Marina F. Bykova, editor of Russian Studies in Philosophy