Concepts of the World: The French Avant-Garde and the Idea of the International, 1910–1940 (FlashPoints #42) (Hardcover) 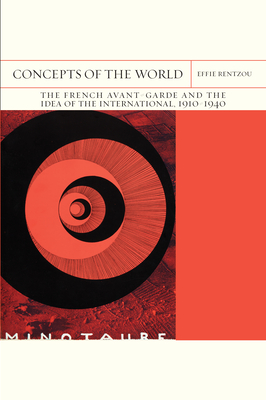 Concepts of the World: The French Avant-Garde and the Idea of the International, 1910–1940 (FlashPoints #42) (Hardcover)

How did the avant-garde imagine its interconnected world? And how does this legacy affect our understanding of the global today?

The writers and artists of the French avant-garde aspired to reach a global audience that would be wholly transformed by their work. In this study, Effie Rentzou delves deep into their depictions of the interwar world as an international and modern landscape, one marked by a varied cosmopolitanism. The avant-garde’s conceptualization of the world paralleled, rejected, or expanded prevailing notions of the global sphere.

The historical avant garde—which encompassed movements like futurism, Dada, and surrealism—was self-consciously international, operating across global networks and developed with the whole world as its horizon and its public. In the heady period between the end of the Belle Époque and the tumult of World War II, both individual artists (including Guillaume Apollinaire, Blaise Cendrars, Francis Picabia, Louis Aragon, Leonora Carrington, and Nicolas Calas) and collective endeavors (such as surrealist magazines and exhibitions) grappled with contemporary anxieties about economic growth, imperialism, and colonialism, as well as various universalist, cosmopolitan, and internationalist visions. By probing these works, Concepts of the World offers an alternative narrative of globalization, one that integrates the avant-garde’s enthusiasm for, as well as resistance to, the process. Rentzou identifies within the avant-garde a powerful political language that expressed the ambivalence of living and creating in an increasingly globalized world—a language that profoundly shaped the way the world has been conceptualized and is experienced today.

EFFIE RENTZOU is a professor of French literature at Princeton University. She is the author of Littérature malgré elle: Le surréalisme et la tranformation du littéraire (Literature Despite Itself: Surrealism and the Transformation of the Literary) and the coeditor of 1913: The Year of French Modernism.

“Marx famously said that so far philosophers have interpreted the world; the point is to change it. Here is what Effie Rentzou has done for our views of the French historical avant-gardes: in a series of vivid and vibrant close-ups, she demonstrates with verve and accuracy that the highly charged combination of dynamic nomadism and messy internationalism, this very ‘rastaquouère’ modernism, has indeed changed our world for good.” —Jean-Michel Rabaté, coeditor of Historical Modernisms: Time, History and Modernist Aesthetics

“Effie Rentzou roots our contemporary understanding of globalization in the surrealist vision of the world in this groundbreaking study, as a movement founded on universalist principles, based in the reinvention of the concept of the human that originated in Greek antiquity. Her analyses of surrealist print journals show how surrealist deconstruction of Enlightenment notions that emerged from Greek thought led to a reimagining of what a new ‘world community’ might look like, how it could transcend and reconfigure existing borders in politics and the arts.” —Katharine Conley, author of Surrealist Ghostliness