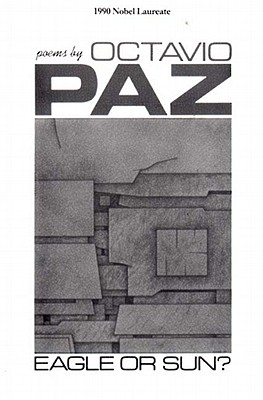 “Octavio Paz is such a masterly presence in the dialogue of Latin American culture that it is easy to forget he is first and foremost a poet… in the polyphony of his voices the poetic one still rings loudest and clearest.” — Roberto González Echevarría, New York Times Book Review

The first major book of short prose poetry in Spanish, Eagle or Sun? (Aguila o Sol?) exerted an enormous influence on modern Latin American writing. Written in 1949-50 by Nobel Laureate Octavio Paz, Eagle or Sun? has as its mythopoeic "place" Mexico––a country caught up in its pre-Columbian past, the world of modern imperialism, and an apocalyptic future foretold by the Aztec calendar. Indeed, three personae of the book--the goddess Itzapaplotl, the prophet clerk, the poet––are manifestations of the threefold aspects of the land. Paz himself explains: "Eagle or Sun? is an exploration of Mexico, yes, but at the same time, and above all, it is an exploration of the relations between language and the poet, reality and language, the poet and history."

Octavio Paz (1914-1998) was born in Mexico City. He wrote many volumes of poetry, as well as a prolific body of remarkable works of nonfiction on subjects as varied as poetics, literary and art criticism, politics, culture, and Mexican history. He was awarded the Jerusalem Prize in 1977, the Cervantes Prize in 1981, and the Neustadt Prize in 1982. He received the German Peace Prize for his political work, and finally, the Nobel Prize for Literature in 1990.