By Night in Chile (Paperback) 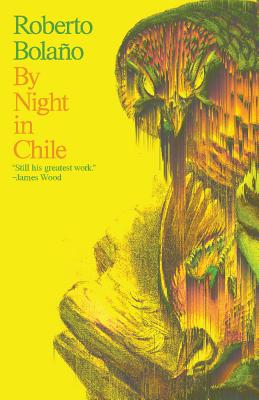 By Night in Chile (Paperback)

A deathbed confession revolving around Opus Dei and Pinochet, By Night in Chile pours out the self-justifying dark memories of the Jesuit priest Father Urrutia.

As through a crack in the wall, By Night in Chile's single night-long rant provides a terrifying, clandestine view of the strange bedfellows of Church and State in Chile. This wild, eerily compact novel—Roberto Bolano's first work available in English—recounts the tale of a poor boy who wanted to be a poet, but ends up a half-hearted Jesuit priest and a conservative literary critic, a sort of lap dog to the rich and powerful cultural elite, in whose villas he encounters Pablo Neruda and Ernst Junger. Father Urrutia is offered a tour of Europe by agents of Opus Dei (to study "the disintegration of the churches," a journey into realms of the surreal); and ensnared by this plum, he is next assigned—after the destruction of Allende—the secret, never-to-be-disclosed job of teaching Pinochet, at night, all about Marxism, so the junta generals can know their enemy. Soon, searingly, his memories go from bad to worse. Heart-stopping and hypnotic, By Night in Chile marks the American debut of an astonishing writer.

Author of 2666 and many other acclaimed works, Roberto Bolano (1953-2003) was born in Santiago, Chile, and later lived in Mexico, Paris, and Spain. He has been acclaimed “by far the most exciting writer to come from south of the Rio Grande in a long time” (Ilan Stavans, The Los Angeles Times),” and as “the real thing and the rarest” (Susan Sontag). Among his many prizes are the extremely prestigious Herralde de Novela Award and the Premio Rómulo Gallegos. He was widely considered to be the greatest Latin American writer of his generation. He wrote nine novels, two story collections, and five books of poetry, before dying in July 2003 at the age of 50.

Chris Andrews was born in Newcastle, Australia, in 1962. He studied at the University of Melbourne and taught there, in the French program, from 1995 to 2008. He also taught at the University of Western Sydney, where he was a member of the Writing and Society Research Center. As well as translating nine books by Roberto Bolano and ten books (and counting) by César Aira, he also brought the French author Kaouther Adimi’s Our Riches into English for New Directions. Andrews has won the Valle-Inclán Prize and the French-American Foundation Translation Prize for his translations. Additionally, he has published the critical studies Poetry and Cosmogony: Science in the Writing of Queneau and Ponge and Roberto Bolano's Fiction: An Expanding Universe as well as two collections of poems, Cut Lunch and Lime Green Chair, for which he won the Anthony Hecht Poetry Prize.
Still his greatest work.
— James Wood

A wonderful torrent of emotion, a brilliant historical meditation, a captivating fantasy…Destined to occupy forever a place in universal literature.
— Susan Sontag

In Chris Andrews's lucid translation, Bolaño's febrile narrative tack and occasional surreal touches bring to mind the classics of Latin American magic realism; his cerebral protagonist and nonfiction borrowings are reminiscent of Thomas Bernhard and W. G. Sebald. The novel, Bolaño's first to be translated into English, is at once occasion for celebration and for mourning.
— New York Times