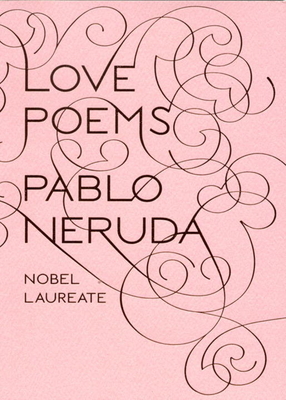 Sensual, earthy love poems that formed the basis for the popular movie Il Postino, now in a beautiful gift book perfect for weddings, Valentine's Day, anniversaries, or just to say "I love you!"

Charged with sensuality and passion, Pablo Neruda’s love poems caused a scandal when published anonymously in 1952. In later editions, these verses became the most celebrated of the Noble Prize winner’s oeuvre, captivating readers with earthbound images that reveal in gentle lingering lines an erotic re-imagining of the world through the prism of a lover’s body: "today our bodies became vast, they grew to the edge of the world / and rolled melting / into a single drop / of wax or meteor...." Written on the paradisal island of Capri, where Neruda "took refuge" in the arms of his lover Matilde Urrutia, Love Poems embraces the seascapes around them, saturating the images of endless shores and waves with a new, yearning eroticism. This wonderful book collects Neruda’s most passionate verses.

Pablo Neruda was born in 1904 in the town of Parral in Chile. He received numerous prestigious awards for his work, including the International Peace Prize in 1950, the Lenin Peace Prize and the Stalin Peace Prize in 1953. In 1971, he won the Nobel Prize for Literature. Two years later he died of leukemia in Santiago, Chile.
It is difficult to find an analogue for the sustained passion and gentleness communicated in this absolutely stunning apotheosis of the poetry of sexual love.
— Library Journal

One of the greatest major poets of the twentieth century.
— The New York Times Book Review

It is hard not to be swept away by the urgency of his language, and that’s especially so when he seems swept away.
— The New Yorker

The greatest poet of the twentieth century—in any language.
— Gabriel García Márquez