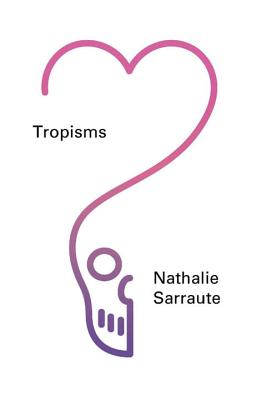 Hailed as a masterpiece by Jean Genet, Marguerite Duras, and Jean-Paul Sartre, Tropisms is considered one of the defining texts of the nouveau roman movement. Nathalie Sarraute has defined her work as the “movements that are hidden under the commonplace, harmless instances of our everyday lives.” Like figures in a grainy photograph, Sarraute’s characters are blurred and shadowy, while her narrative never develops beyond a stressed moment. Instead, Sarraute brilliantly finds and elaborates subtle details—when a relationship changes, when we fall slightly deeper into love, or when something innocent tilts to the smallest degree toward suspicion.

Tropisms—something like ‘prose poems’—as Sarraute calls them that—this is her form! Her texture is anti-novelistic, though she’s decided to write ‘novels’ and launched an important critique of the novel on the basis of her method.

Sarraute
shows us in small immediate moves how a person can be pushed toward marriage or
murder.
— The New Yorker

Sarraute has cracked open the ‘smooth and hard’ surface of the traditional characters in order to discover the endless vibrations of moods and sentiments, the tremors of a never-ending series of earthquakes in the microcosm of the self.
— Hannah Arendt - The New York Review of Books

The book has such intensity that it feels imperative...Her work is immersive and consuming; when you look up from the page you see and feel the world differently.
— Pasha Malla - The Globe and Mail

Sarraute's novels are as witty and formally exact as anything of the kind ever written in French.
— The Guardian