Let Us Believe in the Beginning of the Cold Season: Selected Poems (Paperback) 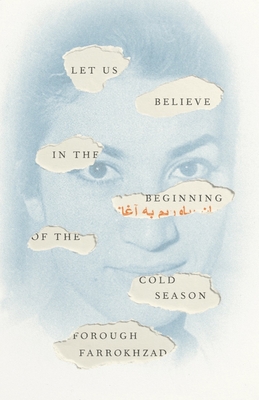 Let Us Believe in the Beginning of the Cold Season: Selected Poems (Paperback)

A ravishing new translation of Iran’s trailblazing, feminist poet in an indispensable collection

In the years since her tragic death in a car accident at age thirty-two in 1967, Forough Farrokhzad has become a poet as iconic and influential as Lorca or Akhmatova, celebrated as a pioneer of modernist Iranian literature and as a leading figure of contemporary world literature. Farrokhzad, as Elizabeth Gray writes in the preface, “remains a beacon to artists, especially women and marginalized artists, who seek freedom in all its forms.”


This thoughtfully curated, deftly translated selection of Farrokhzad’s poems includes work from her whole writing life, early to late. Readers will thoroughly treasure this expansive poet of the quotidian; of longing, loss, and desire; of classical reinvention; of lexical variation and sonic beauty; of terrifying wisdom, hope, and grief.

Poet, filmmaker, screenwriter, and painter, Forough Farrokhzad (1934–1967) was born the third of seven children in Mazandaran, north of Tehran. Drawn to reading and writing poetry as a child, she dropped out of high school to study painting and dressmaking at a technical school. At age sixteen she fell in love with her mother’s cousin; they married, moved to a provincial town, and had a son. During her marriage she worked as a seamstress and wrote the poems of her first collection, The Captive (1955). In the fall of that year, she divorced her husband, relinquished all rights to her son, and moved to Tehran. Three more poetry collections followed: The Wall (1956), Rebellion (1958), and Another Birth (1964). She also translated the work of George Bernard Shaw and Henry Miller, and made a groundbreaking documentary, The House Is Black (1962), about a leper colony in northeastern Iran. Her posthumous collection of late poems Let Us Believe in the Beginning of the Cold Season was published in 1974.

Elizabeth T. Gray, Jr. is the author of the poetry collections Salient and Series | India, and the translator of Wine and Prayer: Eighty Ghazals from the Diwan of Hafiz and Iran: Poems of Dissent.
Living through a period that promised more freedom than it offered, she found a literary form to register its contradictions. Her poetry embraces pleasure in the face of social censure, seeks a genuine spirituality while rebuking the cant of tradition.
— Ratik Asokan - 4Columns

Iran’s leading literary journal, Sokhan, wrote after her funeral, ‘Forough is perhaps the first female writer in Persian literature to express the emotions and romantic feelings of the feminine gender in her verse with distinctive frankness and elegance, for which reason she has inaugurated a new chapter in Persian poetry.

In every culture you have cultural icons, like Shakespeare in Britain. Farrokhzad was like that for contemporary Iran, someone who formed the identity of our contemporariness.
— Mehdi Jami - The Guardian

Farrokhzad wrote poetry on the horizon of working for a civil society in which men’s freedom was not complete without women’s freedom, and for a life in which the soul’s freedom was not separate from the body’s—individually, socially, and culturally. Her poetry is a space that radiates aspiration and exaltation, a space ablaze with vitality, desire, and beauty.
— Adonis

Elizabeth T. Gray’s new literary translations offer the unstoppable voice of world-class poet Forough Farrokhzad to English speakers and broaden the horizon for comparative readings of the poet’s work, a treasured joy unto itself.
— Niloufar Talebi, author of Self-Portrait in Bloom

Joy, rage, despair, transcendence—Farrokhzad's poems, like the life from which they were often drawn, contain multitudes. In Elizabeth T. Gray’s assured translations, each poem is tightly conceived and elegantly modulated, the language precise, the voice as fresh and vivid as Farrokhzad’s own. A vital contribution to Farrokhzad’s legacy.
— Jasmin Darznik, author of The Bohemians

In her translation, Elizabeth T. Gray Jr. sought to capture “as much of the beauty, strangeness, ferocity, and stillness of the original.” She has done so, and more, bringing the best of Farrokhzad into the light, where she is easily recognized to be as relevant and fresh today as she was sixty years ago.
— World Literature Today

Innocence has given way to experience. The poet commands her emotions rather than surrendering to them.
— World Socialist Web Site