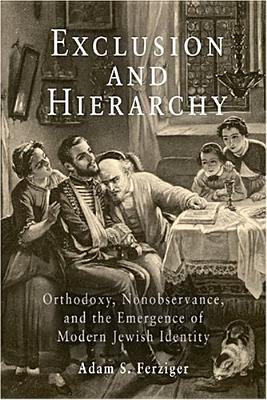 Following the Jewish Enlightenment, many eighteenth-century Jews chose not to observe the religious laws and customs that had earlier marked them as culturally different from their Christian peers. As the Jewish population became increasingly assimilated, an ultraorthodox movement also emerged, creating a discrete identity for a group within the Jewish community that opted not to move toward the mainstream but instead to embrace the traditional laws.

By tracing the evolution of the approach of the Orthodox to their nonpracticing brethren, Adam S. Ferziger sheds new light on the emergence of Orthodoxy as a specific movement within modern Jewish society. In the course of this process, German Orthodoxy in particular articulated a new hierarchical vision of Jewish identity and the structure of modern Jewish society. Viewing Orthodox Judaism as no less a nineteenth-century phenomenon than Reform Judaism or Zionism, Ferziger looks at the ways it defined itself by its relationship to the nonobservant Jewish population. Ferziger argues that as the Orthodox movement emerged, it rejected the stance that the assimilated and nonobservers were deviant outcasts. Instead, they were accepted as legitimate members of a Jewish community, in which Orthodox Jews occupied the pinnacle, as the guardians of its tradition. This book's contribution, however, moves beyond a historical study of Orthodox Judaism. The sociological methodology that Ferziger employs enables the reader to appreciate how other religious groups have sought to carve out their places within the mosaic of modern society.
Adam S. Ferziger is Gwendolyn and Joseph Straus Fellow in Jewish Studies and lecturer in the Graduate Program in Contemporary Jewry at Bar-Ilan University.