Book Traces: Nineteenth-Century Readers and the Future of the Library (Material Texts) (Hardcover) 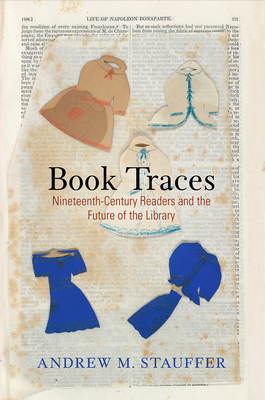 Book Traces: Nineteenth-Century Readers and the Future of the Library (Material Texts) (Hardcover)

In most college and university libraries, materials published before 1800 have been moved into special collections, while the post-1923 books remain in general circulation. But books published between these dates are vulnerable to deaccessioning, as libraries increasingly reconfigure access to public-domain texts via digital repositories such as Google Books. Even libraries with strong commitments to their print collections are clearing out the duplicates, assuming that circulating copies of any given nineteenth-century edition are essentially identical to one another. When you look closely, however, you see that they are not.

Many nineteenth-century books were donated by alumni or their families decades ago, and many of them bear traces left behind by the people who first owned and used them. In Book Traces, Andrew M. Stauffer adopts what he calls guided serendipity as a tactic in pursuit of two goals: first, to read nineteenth-century poetry through the clues and objects earlier readers left in their books and, second, to defend the value of keeping the physical volumes on the shelves. Finding in such books of poetry the inscriptions, annotations, and insertions made by their original owners, and using them as exemplary case studies, Stauffer shows how the physical, historical book enables a modern reader to encounter poetry through the eyes of someone for whom it was personal.

Andrew M. Stauffer is Associate Professor of English at University of Virginia.