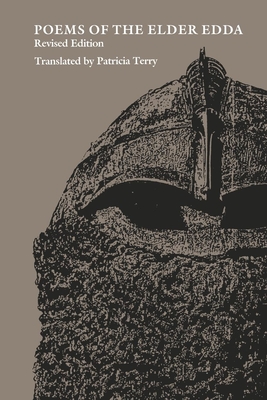 The great poetic tradition of pre-Christian Scandinavia is known to us almost exclusively though the Poetic Edda. The poems originated in Iceland, Norway, and Greenland between the ninth and thirteenth centuries, when they were compiled in a unique manuscript known as the Codex Regius.

The poems are primarily lyrical rather than narrative. Terry's readable translation includes the magnificent cosmological poem V lusp (The Sibyl's Prophecy), didactic poems concerned with mythology and the everyday conduct of life, and heroic poems, of which an important group is concerned with the story of Sigurd and Brynhild. Poems of the Elder Edda will appeal to students of Old Norse, Icelandic, and Medieval literature, as well as to general readers of poetry.
Patricia Terry has taught literature at the University of California, San Diego, and at Barnard College. Poems of hers have appeared in ArtWord Quarterly, Denver Quarterly, The Hudson Review, The Paris Review, Prairie Schooner, and Ekphrasis. She is the translator, with Nancy Vine Durling, of The Romance of the Rose or Guillaume de Dole, by Jean Renart, also available from the University of Pennsylvania Press.