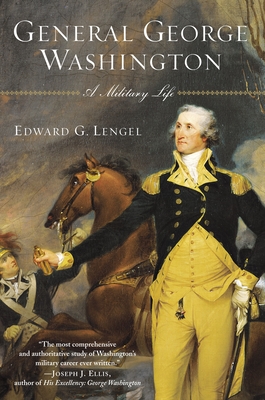 
This title is likely unavailable. Email or call for price and availability.
“The most comprehensive and authoritative study of Washington’s military career ever written.”
–Joseph J. Ellis, author of His Excellency: George Washington

Based largely on George Washington’s personal papers, this engrossing book paints a vivid, factual portrait of Washington the soldier. An expert in military history, Edward Lengel demonstrates that the “secret” to Washington’s excellence lay in his completeness, in how he united the military, political, and personal skills necessary to lead a nation in war and peace. Despite being an “imperfect commander”–and at times even a tactically suspect one–Washington nevertheless possessed the requisite combination of vision, integrity, talents, and good fortune to lead America to victory in its war for independence. At once informative and engaging, and filled with some eye-opening revelations about Washington, the American Revolution, and the very nature of military command, General George Washington is a book that reintroduces readers to a figure many think they already know.

“The book’s balanced assessment of Washington is satisfying and thought-provoking. Lengel gives us a believable Washington . . . the most admired man of his generation by far.”
–The Washington Post Book World

“A compelling picture of a man who was ‘the archetypal American soldier’ . . . The sum of his parts was the greatness of Washington.”
–The Boston Globe

“[An] excellent book . . . fresh insights . . . If you have room on your bookshelf for only one book on the Revolution, this may be it.”
–The Washington Times
EDWARD LENGEL is associate professor of history at the University of Virginia and associate editor of The Papers of George Washington. A specialist in military history, he is the author of World War I Memories and The Irish Through British Eyes.
Advance praise for General George Washington: A Military Life


“Although there is no such thing as definitive history, Lengel’s book now tops the list as the most comprehensive and authoritative study of Washington’s military career ever written.”
–Joseph J. Ellis, author of His Excellency: George Washington

“Historians have long debated George Washington’s generalship. Now, armed with many previously untapped sources obtained by the acclaimed Papers of George Washington project Edward Lengel enters the fray with a full-scale biography of Washington the soldier. With a sharp eye for drama, a mastery of detail, and balanced and insightful judgments, Lengel gives us a brilliant and compelling study of the military strengths and weaknesses of the remarkable man who was ‘first in war, first in peace, and first in the hearts of his countrymen.’”
–John Whiteclay Chambers II, Rutgers University, editor of The Oxford Companion to American Military History

“Ed Lengel knows the Washington military papers as have few historians, past or present. His study of Washington’s career as a soldier is a model of clarity and judicious analysis. It deserves a wide readership.”
–Don Higginbotham, Dowd Professor of History, University of North Carolina, Chapel Hill

“Lengel has immersed himself in the most important sources bearing on Washington’s military life. He has not neglected other primary sources, and he has also used existing scholarship well. The result is a book that covers Washington’s military career from beginning to end and offers fresh insights into Washington’s role in the American Revolution.”
–Robert Middlekauff, Preston Hotchkis Professor of American History, Emeritus, University of California, Berkeley