. . . And His Lovely Wife: A Campaign Memoir from the Woman Beside the Man (Paperback) 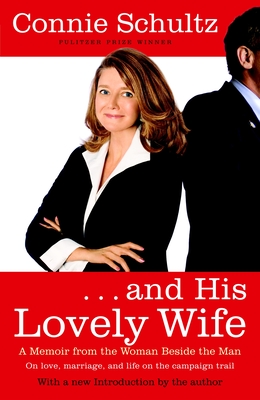 . . . And His Lovely Wife: A Campaign Memoir from the Woman Beside the Man (Paperback)


Available in Warehouse. Wait for Email Confirmation for ETA
Writing with warmth and humor, Connie Schultz reveals the rigors, joys, and absolute madness of a new marriage at midlife and campaigning with her husband, Sherrod Brown, now the junior senator from Ohio. She describes the chain of events leading up to Sherrod’s decision to run for the Senate (he would not enter the fray without his wife’s unequivocal support), and her own decision to step down from writing her Pulitzer Prize-winning column during the course of one of the nation’s most intensely watched races. She writes about the moment her friends in the press became not so friendly, the constant campaign demands on her marriage and family life, and a personal tragedy that came out of the blue. Schultz also shares insight into the challenges of political life: dealing with audacious bloggers, ruthless adversaries, and political divas; battling expectations of a political wife; and the shock of having staffers young enough to be her children suddenly directing her every move. Connie Schultz is passionate and outspoken about her opinions–in other words, every political consultant’s nightmare, and every reader’s dream.

“[Schultz is] a Pulitzer Prize—winning journalist with a mordant wit. . . . The [campaign memoir] genre takes on new life.”
–The Washington Post Book World

“With her characteristic wit and reportorial thoroughness, [Schultz] describes the behind-the-scenes chaos, frustration and excitement of a political campaign and the impact it has on a candidate’s family.”
–Minneapolis Star Tribune

“Witty and anecdotal, whether read by a Democrat or a Republican.”
–Deseret Morning News

“Frank and feisty . . . a spunky tribute to the survival of one woman’s spirit under conditions in which it might have been squelched.”
–The Columbus Dispatch
Connie Schultz, a biweekly columnist for the Cleveland Plain Dealer and Creators Syndicate, won the Pulitzer Prize for Commentary in 2005. Her other awards include the Scripps-Howard National Journalism Award, the National Headliners Award, the James Batten Medal, and the Robert F. Kennedy Award for social-justice reporting. Her narrative series “The Burden of Innocence,” which chronicled the life of a man wrongly incarcerated for rape, was a Pulitzer Prize finalist. Connie Schultz is married to Ohio’s senior senator, Sherrod Brown, and has two children and two stepchildren.