2007-Eleven: and Other American Comedies (Paperback) 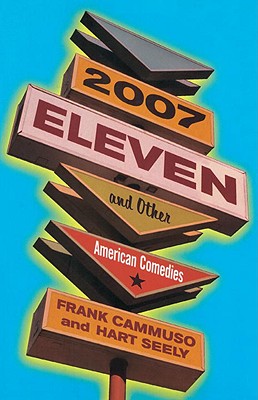 2007-Eleven: and Other American Comedies (Paperback)


This title is likely unavailable. Email or call for price and availability.
From the pages of The New Yorker, The New York Times, and Slate stagger Frank Cammuso and Hart Seely, restoring a cheerful sanity to our deranged lives and times.

Every now and then, funny writing somehow manages to retain full possession of literary quality. Please see Twain, Heller, Benchley, Parker, Frazier, Geng. And now please see Cammuso and Seely. If you're not some famous person in our hyped, commodified, three-screen (movie, TV, computer), celeb-ridden society, count your blessings. Because if you are, Cammuso and Seely will probably get you sooner or later. They got Martha Stewart--they have her planning gracious plans for her version of the Son of God's final repast: "Jesus has indicated--against my better wishes--that He intends to gird Himself with a towel and wash everybody's feet. So be it. But beforehand, I'll run his terry cloth for five minutes in the dryer, making it toasty and soft." They (fondly) postu-late how Phil Rizzuto might have written a characteristically fractionated version of "Casey at the Bat": "'Fraud!' cried the maddened thousands, and the echo murmured 'Fraud.' / Hey, Murcer! Look! Bea Arthur! Didn't she play Maude?" The Flintstones become the Clintstones, Quentin Tarantino directs The Three Little Pigs, and Dr. Seuss collaborates poetically with Rod Serling.

Even when the targets of these pieces are of the moment, Cammuso and Seely's humor will endure. What's more evanescent than pop-music stardom? Sex, maybe, but not much else. But who won't laugh, even years from now, as Cammuso and Seely--in "Six Degrees of Chuck Berry"--introduce some of the record industry's often interchangeable personages to each other: "Tanya, Enya. Enya, Shania. Shania, Mariah. Mariah, Wynonna. Wynonna, Fiona . . . " Nobody.
Frank Cammuso draws editorial cartoons for the Post-Standard newspaper in Syracuse, New York. His work has appeared in The New Yorker, The New York Times, Newsweek, The Washington Post, USA Today, and The Village Voice.

Hart Seely is an award-winning reporter for the Post-Standard newspaper in Syracuse, New York. His work has appeared in The New Yorker, The New York Times, The New Republic, National Lampoon, The Village Voice, and Spy magazine. He is married and has three children.
"I laughed out loud, even though my captors warned me not to!"
--Steve Martin

"These guys are very smart and very funny. And there are TWO of them. I am dead meat."      --Dave Barry

"Who's on first today? Cammuso and Seely."
--Christopher Buckley