The Politics of Race in Panama: Afro-Hispanic and West Indian Literary Discourses of Contention (Paperback) 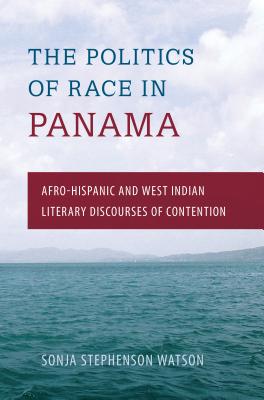 The Politics of Race in Panama: Afro-Hispanic and West Indian Literary Discourses of Contention (Paperback)

"Delves into the historical convergence of peoples and cultural traditions that both enrich and problematize notions of national belonging, identity, culture, and citizenship."--Antonio D. Tillis, editor of Critical Perspectives on Afro-Latin American Literature

"With rich detail and theoretical complexity, Watson reinterprets Panamanian literature, dismantling longstanding nationalist interpretations and linking the country to the Black Atlantic and beyond. An engaging and important contribution to our understanding of Afro-Latin America."--Peter Szok, author of Wolf Tracks: Popular Art and Re-Africanization in Twentieth-Century Panama

"Illuminates the deeper discourse of African-descendant identities that runs through Panama and other Central American countries."--Dawn Duke, author of Literary Passion, Ideological Commitment: Toward a Legacy of Afro-Cuban and Afro-Brazilian Women Writers

This volume tells the story of two cultural groups: Afro-Hispanics, whose ancestors came to Panama as African slaves, and West Indians from the English-speaking countries of Jamaica and Barbados who arrived during the mid-nineteenth and early-twentieth centuries to build the railroad and the Panama Canal.

While Afro-Hispanics assimilated after centuries of mestizaje (race mixing) and now identify with their Spanish heritage, West Indians hold to their British Caribbean roots and identify more closely with Africa and the Caribbean.

By examining the writing of black Panamanian authors, Sonja Watson highlights how race is defined, contested, and inscribed in Panama. She discusses the cultural, racial, and national tensions that prevent these two groups from forging a shared Afro-Panamanian identity, ultimately revealing why ethnically diverse Afro-descendant populations continue to struggle to create racial unity in nations across Latin America and the Caribbean.

A volume in the series Latin American and Caribbean Arts and Culture, funded by the Andrew W. Mellon Foundation

Sonja Stephenson Watson is director of the Women's and Gender Studies Program and associate professor of Spanish at the University of Texas at Arlington.