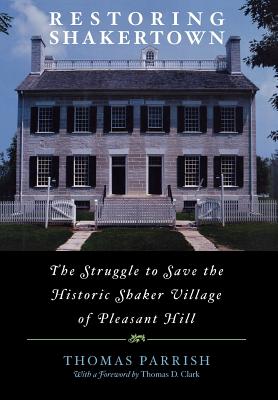 Mother Ann Lee, founder of the Shakers, articulated a vision of a community that embraced sacrifice over the needs of the individual; the result was one of the most successful utopian experiments of nineteenth-century America. The Shakers, an idealistic offshoot of the ascetic Quaker religion, grew to as many as six thousand members in nineteen communities reaching from New England to the Midwest. Lee's experiment, focused mainly on simplicity, celibate communal living, and sexual equality, provided a model of prosperity for more than one hundred years. Founded in 1806, Shaker Village of Pleasant Hill, Kentucky, was a thriving community located in the center of the bluegrass region. After the Civil War, a steadily shrinking membership resulted in the gradual decline of this remarkable community, and the last remaining Shaker to reside at Pleasant Hill died in 1923. In the years immediately following, it appeared as though the village would fall prey to neglect and a lack of historic preservation. In 1961, however, local citizens formed a private not-for-profit organization to preserve and restore the village and to interpret the rich heritage of the Pleasant Hill Shakers for future generations. Over several years, and against incredible odds, this group succeeded in raising the funds necessary for the restoration projects. By 1968, eight buildings at Shakertown, carefully adapted for modern use while retaining their historical and architectural significance, had been opened to the public. Thomas Parrish's Restoring Shakertown masterfully explains how the Shaker settlement was saved from the ravages of time and transformed into a nationally renowned landmark of historic preservation. In chronicling how the hopes of the early fund-raisers quickly were challenged by the harsh reality of economic hardships, the book serves as a valuable study in modern philanthropy. Parrish also details the village's negotiation of legal challenges and how its final plans for creating awareness of the Shakers' legacy set the standard for later museum developments around the country. In addition to recounting the remarkable history of the formation and eventual demise of the "Shaking Quakers," Parrish presents a dramatic chronicle of the village's evolving fortunes. From describing the challenges of financing the restoration to finding preservation experts to achieve the highest standards of authenticity, Restoring Shakertown reveals the complexities and rewards of the preservation of one of Kentucky's most significant historical and architectural sites.