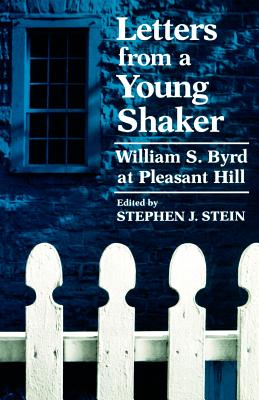 In the early nineteenth century, a young man belonging to the prominent Byrd family of Virginia, the grandson of William Byrd III, took up residence in the Shaker community at Pleasant Hill, Kentucky. Over the next two years, 1826--1828, he wrote a series of letters to his father, a federal judge in Ohio, describing his experiences and his impressions of the United Society of Believers, as the Shakers were formally called. Eventually, William S. Byrd became a convert to the society and an advocate of its beliefs and practices. His letters -- cut short by his father's death -- offer today's reader an intimate view of communal life among the Shakers at a time of considerable turmoil in their village.

In the correspondence of William S. Byrd, the Shaker experience is expressed in human terms and becomes a living faith. The letters also record the trials associated with conversion to a religion that was socially unacceptable to many Americans of the time. Some of their more poignant passages describe young Byrd's attempt to reconcile the tensions created by his membership in two families -- the one of blood and the one of faith.

Letters from a Young Shaker provides an unusually instructive commentary on life in a Shaker community, on the questions agitating the community, and on the appeal of Shakerism to Americans in the early nineteenth century. In addition to the letters, the book contains other documents bearing on William Byrd's relationship with the settlement at Pleasant Hill and an introduction placing him in the social and religious context of the period. This book will appeal to historian of American society and to anyone interested in the Shaker way of life.