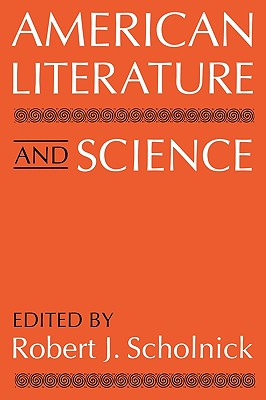 Literature and science are two disciplines are two disciplines often thought to be unrelated, if not actually antagonistic. But Robert J. Scholnick points out that these areas of learning, up through the beginning of the nineteenth century, "were understood as parts of a unitary endeavor." By mid-century they had diverged, but literature and science have continued to interact, conflict, and illuminate each other. In this innovative work, twelve leaders in this emerging interdisciplinary field explore the long engagement of American writers with science and uncover science's conflicting meanings as a central dimension of the nation's conception of itself. Reaching back to the Puritan poet-minister-physician Edward Taylor, who wrote at the beginning of the scientific revolution, and forward to Thomas Pynchon, novelist of the cybernetic age, this collection of original essays contains essential work on major writers, including Franklin, Jefferson, Poe, Emerson, Thoreau, Twain, Hart Crane, Dos Passos, and Charles Olson. Through its exploration of the ways that American writers have found in science and technology a vital imaginative stimulus, even while resisting their destructive applications, this book points towards a reconciliation and integration within culture. An innovative look at a neglected dimension of our literary tradition, American Literature and Science stands as both a definition of the field and an invitation to others to continue and extend new modes of inquiry.