The Truth That Never Hurts: Writings on Race, Gender, and Freedom (Paperback) 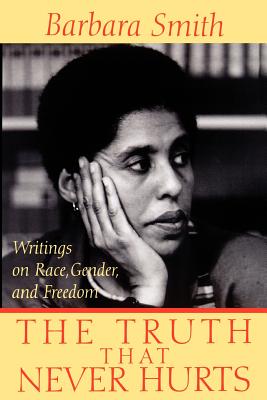 The Truth That Never Hurts: Writings on Race, Gender, and Freedom (Paperback)


Available in Warehouse. Wait for Email Confirmation for ETA
The Truth That Never Hurts: Writings on Race, Gender, and Freedom brings together more than two decades of literary criticism and political thought about gender, race, sexuality, power, and social change. As one of the first writers in the United States to claim black feminism for black women, Barbara Smith has done groundbreaking work in defining black women’s literary traditions and in making connections between race, class, sexuality, and gender.
Smith’s essay “Toward a Black Feminist Criticism,” is often cited as a major catalyst in opening the field of black women’s literature. Pieces about racism in the women’s movement, black and Jewish relations, and homophobia in the Black community have ignited dialogue about topics that few other writers address. The collection also brings together topical political commentaries on the 1968 Chicago convention demonstrations; attacks on the NEA; the Anita Hill–Clarence Thomas Senate hearings; and police brutality against Rodney King and Abner Louima. It also includes a never-before-published personal essay on racial violence and the bonds between black women that make it possible to survive.
Barbara Smith is co-founder and publisher of Kitchen Table: Women of Color Press. She has edited three major collections about Black women, including Home Girls: A Black Feminist Anthology (Rutgers University Press), and is co-editor with Wilma Mankiller, Gwendolyn Mink, Marysa Navarro, and Gloria Steinem of The Reader's Companion to U.S. Women's History.
A feminist writer and theorist of some repute, Smith founded Kitchen Table: Women of Color Press with the late "black lesbian mother warrior feminist poet" Audre Lorde, and was the first woman of color appointed to the Modern Language Association's Commission on the Status of Women in the Profession. Her seminal 1977 essay "Toward a Black Feminist Criticism," which puts forth the notion that a "Black women's literary tradition" not only exists, but thrives, fittingly opens this collection of newer and older, still vibrant works, most previously published in often hard-to-find journals or anthologies. Noting that "it is unnerving to imagine" what kind of writing she might have produced had she not come out, Smith registers obstacles to her current work on a wide-ranging history of black lesbians and gays in America, citing a recent two-volume encyclopedia (Darlene Clark Hine's Black Women in America) in which there are only six entries under "Lesbian." In the final essay of the collection, "A Rose," Smith recalls her friend, the late Lucretia "Lu" Medina Diggs, and mourns the loss of her and Lorde, stressing that she will not be deterred from her fight for political awareness and compassion. Smith's writing frequently reaches strident polemicist peaks, but, just as frequently, stretches of sublime prose translate her crystalline intellect to the page, exciting both mind and senses.
— Publishers Weekly

Barbara Smith is visionary, courageous, and insightful. Her work provides a crucial challenge to all of us.
— Cornel West

A provocative collection of impassioned essays written from a radical, gay, African-American, feminist perspective. Smith, co-founder and publisher of Kitchen Table: Women of Color Press, has been publishing literary and social criticism for over 20 years. As a literary critic, she chastises the academic establishment for often misinterpreting and largely disregarding the voices of black womengay black women in particular. In one of her most influential essays, ``Toward a Black Feminist Criticism,'' written in 1977, Smith, contending that ``black women writers constitute an identifiable literary tradition,'' pleads for a black feminist approach toward examining literature. Only the black feminist critic, she argues, is fully able to comprehend the nuances of work by black women, such as the depth of Sula and Nells relationship in Toni Morrisons novel Sula. Smith is also critical of nonlesbians addressing the black lesbian experience. In ``The Truth that Never Hurts,'' published in the late '80s, she argues that positive depictions of black lesbians are sorely lacking and that ``far too many non-lesbian black women who are actively involved in defining the African-American womens literary renaissance . . . completely ignore black lesbian existence or are actively hostile to it.'' Smiths equally fervent social and political writings are informed by a Marxist viewpoint. She argues, sometimes unpersuasively, that heterosexism and sexism can wither only when capitalism is destroyed. Shes especially concerned about the lack of role models for gay black youth; and she takes to task her gay brothers and sisters who have chosen to stay closeted because they are ``more concerned with their individual security and careers than they are with building community and working for radical political change.'' This manifesto is always challenging and often convincing.
— Kirkus Reviews

At every moment of serious political crisisùand no thinking person can argue that ours is not such a momentùcertain writers step forward with words that seem to ring from the very heart of history. Barbara Smith is certainly one of these writers, and her new book, electrifying, thought-provoking, illuminating, eloquent, harsh, and funny, is essential reading. Whether you agree with everything she says is not important; the essays in this book will revivify your heart and mind and reawaken a passion for activism and for justice.
— Tony Kushner

In these essays, Smith, an independent scholar and editor, explores several explosive issues, among them sexual politics, racism and women's studies, and homophobia.
— Library Journal

The Truth That Never Hurts: Writings on Race, Gender, and Freedom provides a universal message about struggle, resistance, and freedom, grounded within a black Lesbian feminist critique of AmericaÆs culture and politics. The cogently written essays represent a cross-section of SmithÆs work over the past twenty years and the first book dedicated exclusively to her own writing. Focusing on race, feminism, and the politics of sexuality, Smith provides an alternative lens to view the world by making connections between systems of oppression and offering suggestions for social change.
— Washington Blade

Barbara Smith's uncompromising intelligence helped invent the politics of intersection which grounds progressive thinking today. These essays deliver trenchant analysis from one of the most original, astute, and practical thinkers in the gay, lesbian, bisexual, and transgender movement.
— Urvashi Vaid

As a black lesbian feminist activist and scholar, Smith is a highly respected voice of conscience who speaks discomforting but necessary truths about the interlocking nature of oppressions within American culture and institutions. These landmark essays . . . show Smith challenging academic, political, and community organizations to expand their missions in order to include persons who have been perennially at the margins of our society. . . . Recommended.
— MultiCultural Review

Smith's book is an excellent example of powerful, introspective writing that challenges readers to reexamine their stance on complex issues concerning race and gender.
— Bloomsbury Review

Smith has provided us with a collection of erudite and profoundly moving writings [which are] smart, incisive, and instructive. There is no stone that Smith has left unturned. From homophobia in the black community to police brutality and including racism in the womenÆs movement, black women and anti-Semitism . . . Barbara Smith has explained the linkages between the multiplicity of oppressions facing blacks in general and black lesbians in particular.
— Journal of Lesbian Studies

The ancestors are surely ecstatic about the diligence, courage, passion, and good humor exhibited in The Truth That Never Hurts. This is a landmark work from a pioneering activist who has always kept the faith.
— Evelyn C. White

Sobering in what it has to tell us, The Truth That Never Hurts forces us to face those truths that disrupt the placid surfaces of our lives. A personal/political odyssey that documents some of the most critical moments in the last three decades of our national life, Smith's book forces us to new levels of awareness. Her piercing eye and uncompromising search for human justice for all make this volume must-reading for everyone who cares about the future.
— Nellie Y. McKay