When Riot Cops Are Not Enough: The Policing and Repression of Occupy Oakland (Critical Issues in Crime and Society) (Paperback) 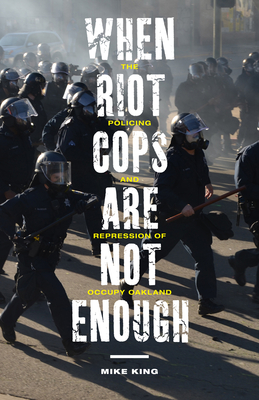 When Riot Cops Are Not Enough: The Policing and Repression of Occupy Oakland (Critical Issues in Crime and Society) (Paperback)


This title is likely unavailable. Email or call for price and availability.
In When Riot Cops Are Not Enough, sociologist and activist Mike King examines the policing, and broader political repression, of the Occupy Oakland movement during the fall of 2011 through the spring of 2012. King’s active and daily participation in that movement, from its inception through its demise, provides a unique insider perspective to illustrate how the Oakland police and city administrators lost the ability to effectively control the movement.

Drawn from King’s intensive field work, the book focuses on the physical, legal, political, and ideological dimensions of repression—in the streets, in courtrooms, in the media, in city hall, and within the movement itself—When Riot Cops Are Not Enough highlights the central role of political legitimacy, both for mass movements seeking to create social change, as well as for governmental forces seeking to control such movements. Although Occupy Oakland was different from other Occupy sites in many respects, King shows how the contradictions it illuminated within both social movement and police strategies provide deep insights into the nature of protest policing generally, and a clear map to understanding the full range of social control techniques used in North America in the twenty-first century.

MIKE KING is an assistant professor of criminal justice at Bridgewater State University in Massachusetts.

“Vital, important and compelling, Mike King offers a nuanced accounting of the cat-and-mouse game of social protest and social control. Grounded in the experience of Occupy Oakland, When Riot Cops Are Not Enough is immensely relevant to the upcoming generation of militant activists, engaged scholars and community police.”

"By charting the tight interplay of resistance and repression that connects the murder of Oscar Grant to the Occupy Movement in Oakland and beyond, Mike King's book provides an essential weapon for our collective arsenal."
— George Ciccariello-Maher

"Mike King has produced a fascinating study of the repression of Occupy Oakland. His groundbreaking analysis ?makes sense of one of the most significant political episodes in recent American history. This is a compelling demonstration of what theoretically informed activist research can achieve."
— Andrej Grubacic

"Clear, concise, and compelling, When Riot Cops Are Not Enough is not only a deep and rich narrative, but an extremely valuable piece of ethnographic research."
— Patrick Gillham

"As a piece of public sociology, the book furthers understanding of the policies and the politics of repression and social control."
— American Journal of Sociology