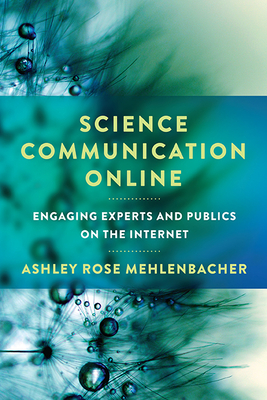 
Available in Warehouse. Wait for Email Confirmation for ETA
This book cannot be returned, cancelled, or exchanged. Please call for availability and pricing
Uncloistered by the web, science is finding its way into previously unimagined audiences. Whether collecting data in one’s backyard to help wildlife experts manage wolf populations or even funding research out of one’s own pocket, nonexperts can engage science at an unprecedented scale. As science communication has moved online, a range of important new genres have emerged that put professionals and the public into conversation with each other. In Science Communication Online: Engaging Experts and Publics on the Internet, Ashley Rose Mehlenbacher takes up these “trans-scientific” genres to explore how scientists are adapting their communications, how publics are increasingly involved in science, and how boundaries between experts and nonexperts continue to shift.
Bringing together genre studies and the rhetoric of science, Mehlenbacher examines a range of new forms of science communication that challenge traditional presumptions about experts and nonexperts—including Twitter and Reddit AMAs, crowdfunding proposals such as Kickstarter and Experiment.com, civic-minded databases such as Safecast, and the PLOS blogging network. Science Communication Online illustrates the unique features of these genres and connects them to their rhetorical functions and the larger context leading to their emergence and evolution—from the democratization of science, challenges to expertise and expert status, and new political economies. Science Communication Online captures the important moment we find ourselves in now—one not defined by science and society but science in society.
Ashley Rose Mehlenbacher is Assistant Professor in the Department of English Language and Literature at the University of Waterloo, and coeditor of Emerging Genres in New Media Environments.
"Of interest to all in the sciences and those among the interested public who wish to participate in new ways or to be better informed about the opportunities. Summing up: Recommended.”
—CHOICE