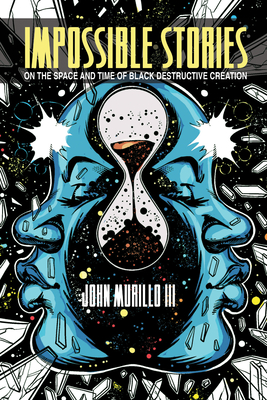 
This title is likely unavailable. Email or call for price and availability.
In Impossible Stories, John Murillo offers bold new readings of recent and canonical Black creative works within an Afro-pessimistic framework to excavate how time, space, and blackness intersect—or, rather, crash. Building on Michelle Wright’s ideas about dislocation from time and space as constitutive to being Black in America, as well as on W. E. B. DuBois’s theories of temporalization, he reconsiders the connections between physical phenomena and principles, literature, history, and the fragmented nature of Black time and space.

Taking as his lens the fragment—fragmented bodies, fragments of memories, fragments of texts—Murillo theorizes new directions for Black identity and cultural production. Combining a critical engagement of physics and metaphysics with innovative readings of Gayl Jones’s Corregidora, Octavia Butler’s Kindred, Toni Morrison’s Beloved, Kiese Laymon’s Long Division, Dionne Brand’s A Map to the Door of No Return, and Paul Beatty’s The Sellout, he offers new ways to think about anti-Black racism and practice Black creativity. Ultimately, in his equally creative and analytical responses to depictions of Black people left out of history and barred from spaces, Murillo argues that through Afro-pessimism, Black people can fight the anti-Black cosmos.

John Murillo III is Assistant Professor of African American studies at University of California, Irvine.
“Impossible Stories is clever and provocative. Murillo effectively stages a set of conversations between and among physics, literary production, and African American studies and in doing so does the impossible work of telling the impossible story of artistic creation in the context of trenchant anti-Black racism.” —GerShun Avilez, author of Radical Aesthetics and Modern Black Nationalism

“This is a powerful scholarly and creative work. It should find an interested and enthusiastic audience among academics, artists, and activists concerned with issues of aesthetic, ethical, and political import to the matter of black living and dying. This is a first-rate study of stories that both will and will not be heard but that must to be told, over and over again.” —Jared Sexton, author of Black Masculinity and the Cinema of Policing