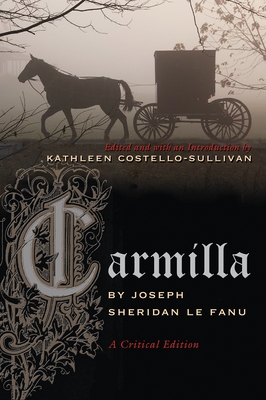 First serialized in the journal "The Dark Blue" and published shortly thereafter in the short story collection In a Glass Darkly, Le Fanu's 1872 vampire tale is in many ways the overlooked older sister of Bram Stoker's more acclaimed Dracula. A thrilling gothic tale, Carmilla tells the story of a young woman lured by the charms of a female vampire.

This edition includes a student-oriented introduction, tracing the major critical responses to Carmilla, and four interdisciplinary essays by leading scholars who analyze the story from a variety of theoretical perspectives. Ranging from politics to gender, Gothicism to feminism, and nineteenth-century aestheticism to contemporary film studies, these critical yet accessible articles model the diverse ways that scholars can approach a single text. With a glossary, biography, bibliography, and explanatory notes on the text, this edition is ideal for students of Irish and British nineteenth-century literature.
Kate Costello-Sullivan is Associate Professor of Modern Irish Literature and the Director of the Irish Literature Program in the English department at Le Moyne College. Her articles have appeared in Working Papers in Irish Studies, Postscript: A Journal of Graduate Criticism and Theory and New Hibernia Review.