Policy and Choice: Public Finance Through the Lens of Behavioral Economics (Paperback) 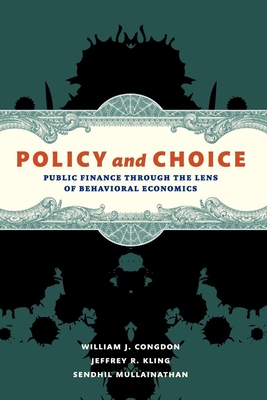 Policy and Choice: Public Finance Through the Lens of Behavioral Economics (Paperback)

Traditional public finance provides a powerful framework for policy analysis, but it relies on a model of human behavior that the new science of behavioral economics increasingly calls into question. In Policy and Choice economists William Congdon, Jeffrey Kling, and Sendhil Mullainathan argue that public finance not only can incorporate many lessons of behavioral economics but also can serve as a solid foundation from which to apply insights from psychology to questions of economic policy.

The authors revisit the core questions of public finance, armed with a richer perspective on human behavior. They do not merely apply findings from psychology to specific economic problems; instead, they explore how psychological factors actually reshape core concepts in public finance such as moral hazard, deadweight loss, and incentives.

Part one sets the stage for integrating behavioral economics into public finance by interpreting the evidence from psychology and developing a framework for applying it to questions in public finance. In part two, the authors apply that framework to specific topics in public finance, including social insurance, externalities and public goods, income support and redistribution, and taxation.

In doing so, the authors build a unified analytical approach that encompasses both traditional policy levers, such as taxes and subsidies, and more psychologically informed instruments. The net result of this innovative approach is a fully behavioral public finance, an integration of psychology and the economics of the public sector that is explicit, systematic, rigorous, and realistic.

William J. Congdon is a research director in the Brookings Institution's Economic Studies program, where he studies how best to apply behavioral economics to public policy. Jeffrey R. Kling is the associate director for economic analysis at the Congressional Budget Office, where he contributes to all aspects of the agency's analytic work. He is a former deputy director of Economic Studies at Brookings. Sendhil Mullainathan is a professor of economics at Harvard University and a director of ideas42--a non-profit that applies behavioral science to social problems. He previously taught at the Massachusetts Institute of Technology, and in 2002 he was awarded a MacArthur fellowship.