Beyond Snowden: Privacy, Mass Surveillance, and the Struggle to Reform the NSA (Hardcover) 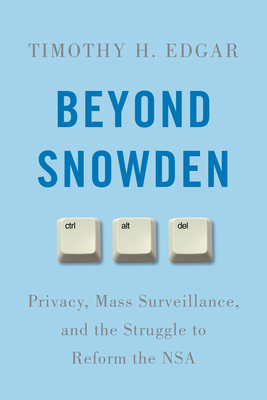 Beyond Snowden: Privacy, Mass Surveillance, and the Struggle to Reform the NSA (Hardcover)

America's mass surveillance programs, once secret, can no longer be ignored. While Edward Snowden began the process in 2013 with his leaks of top secret documents, the Obama administration's own reforms have also helped bring the National Security Agency and its programs of signals intelligence collection out of the shadows. The real question is: What should we do about mass surveillance?

Timothy Edgar, a long-time civil liberties activist who worked inside the intelligence community for six years during the Bush and Obama administrations, believes that the NSA's programs are profound threat to the privacy of everyone in the world. At the same time, he argues that mass surveillance programs can be made consistent with democratic values, if we make the hard choices needed to bring transparency, accountability, privacy, and human rights protections into complex programs of intelligence collection. Although the NSA and other agencies already comply with rules intended to prevent them from spying on Americans, Edgar argues that the rules--most of which date from the 1970s--are inadequate for this century. Reforms adopted during the Obama administration are a good first step but, in his view, do not go nearly far enough.

Edgar argues that our communications today--and the national security threats we face--are both global and digital. In the twenty first century, the only way to protect our privacy as Americans is to do a better job of protecting everyone's privacy. Beyond Surveillance: Privacy, Mass Surveillance, and the Struggle to Reform the NSA explains both why and how we can do this, without sacrificing the vital intelligence capabilities we need to keep ourselves and our allies safe. If we do, we set a positive example for other nations that must confront challenges like terrorism while preserving human rights. The United States already leads the world in mass surveillance. It can lead the world in mass surveillance reform.

Timothy H. Edgar defended privacy after 9/11 as a lawyer for the American Civil Liberties Union before going inside America's growing surveillance state as the deputy for civil liberties in the Office of the Director of National Intelligence--a story he tells in Beyond Snowden: Privacy, Mass Surveillance and the Struggle to Reform the NSA. Edgar then moved to the White House to advise the National Security Council on cybersecurity policy, in a job that President Barack Obama announced in 2009 that was "specifically dedicated to safeguarding the privacy and civil liberties of the American people."In 2013, Edgar left government for Brown University, where he is a Senior Fellow at the Watson Institute for International and Public Affairs. Edgar helped put together Brown's Executive Master in Cybersecurity and is on the advisory board of Virtru, an encryption software company. Edgar is a contributing editor to Lawfare and his work has appeared in the Wall Street Journal, the Los Angeles Times, the Guardian, Foreign Affairs, and Wired. Edgar is a graduate of Harvard Law School and Dartmouth College.