American Grand Strategy in the Age of Trump (Paperback) 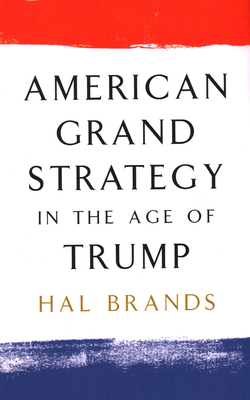 American Grand Strategy in the Age of Trump (Paperback)

American foreign policy is in a state of upheaval. The rise of Donald Trump and his "America First" platform have created more uncertainty about America's role in the world than at any time in recent decades. From the South China Sea, to the Middle East, to the Baltics and Eastern Europe, the geopolitical challenges to U.S. power and influence seem increasingly severe--and America's responses to those challenges seem increasingly unsure. Questions that once had widely accepted answers are now up for debate. What role should the United States play in the world? Can, and should, America continue to pursue an engaged an assertive strategy in global affairs?

In this book, a leading scholar of grand strategy helps to make sense of the headlines and the upheaval by providing sharp yet nuanced assessments of the most critical issues in American grand strategy today. Hal Brands asks, and answers, such questions as: Has America really blundered aimlessly in the world since the end of the Cold War, or has its grand strategy actually been mostly sensible and effective? Is America in terminal decline, or can it maintain its edge in a harsher and more competitive environment? Did the Obama administration pursue a policy of disastrous retrenchment, or did it execute a shrewd grand strategy focused on maximizing U.S. power for the long term? Does Donald Trump's presidency mean that American internationalism is dead? What type of grand strategy might America pursue in the age of Trump and after? What would happen if the United States radically pulled back from the world, as many leading academics--and, at certain moments, the current president--have advocated? How much military power does America need in the current international environment?

Grappling with these kinds of issues is essential to understanding the state of America's foreign relations today and what path the country might take in the years ahead. At a time when American grand strategy often seems consumed by crisis, this collection of essays provides an invaluable guide to thinking about both the recent past and the future of America's role in the world.

Hal Brands is Henry A. Kissinger Distinguished Professor of Global Affairs at the Johns Hopkins School of Advanced International Studies and Senior Fellow at the Center for Strategic and Budgetary Assessments. His other books include What Good Is Grand Strategy? and Making the Unipolar Moment. He has served in the Pentagon as a special assistant to the secretary of defense for strategic planning.