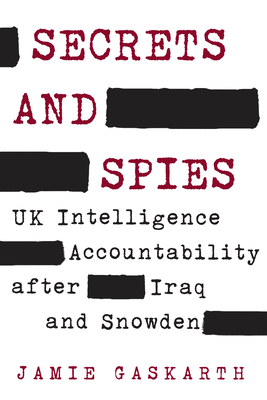 How can democratic governments hold intelligence and security agencies accountable when what they do is largely secret? Using the UK as a case study, this book addresses this question by providing the first systematic exploration of how accountability is understood inside the secret world. It is based on new interviews with current and former UK intelligence practitioners, as well as extensive research into the performance and scrutiny of the UK intelligence machinery. The result is the first detailed analysis of how intelligence professionals view their role, what they feel keeps them honest, and how far external overseers impact on their work

Moving beyond the conventional focus on oversight, the book examines how accountability works in the day to day lives of these organizations, and considers the impact of technological and social changes, such as artificial intelligence and social media.

The UK is a useful case study as it is an important actor in global intelligence, gathering material that helps inform global decisions on such issues as nuclear proliferation, terrorism, transnational crime, and breaches of international humanitarian law. On the flip side, the UK was a major contributor to the intelligence failures leading to the Iraq war in 2003, and its agencies were complicit in the widely discredited U.S. practices of torture and "rendition" of terrorism suspects. UK agencies have come under greater scrutiny since those actions, but it is clear that problems remain. The book concludes with a series of suggestions for improvement, including the creation of intelligence ethics committees, allowing the public more input into intelligence decisions.

The issues explored in this book have important implications for researchers, intelligence professionals, overseers, and the public when it comes to understanding and scrutinizing intelligence practice.

Jamie Gaskarth is a Professor of Foreign Policy and International Relations at the Open University, UK where he teaches strategy and decision-making. His research looks at the ethical dilemmas of leadership and accountability in intelligence, foreign policy, and defense. He is author/editor/co-editor of six books and served on the Academic Advisory panel for the 2015 UK National Security Strategy and Strategic Defense and Security Review.