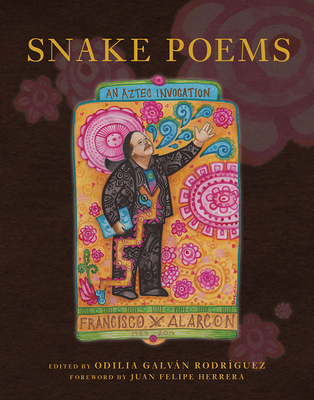 
This title is likely unavailable. Email or call for price and availability.
For beloved writer and mentor Francisco X. Alarcón, the collection Snake Poems: An Aztec Invocation was a poetic quest to reclaim a birthright. Originally published in 1992, the book propelled Alarcón to the forefront of contemporary Chicano letters.

Alarcón was a stalwart student, researcher, and specialist on the lost teachings of his Indigenous ancestors. He first found their wisdom in the words of his Mexica (Aztec) grandmother and then by culling through historical texts. During a Fulbright fellowship to Mexico, Alarcón uncovered the writings of zealously religious Mexican priest Hernando Ruiz de Alarcón (1587–1646), who collected (often using extreme measures), translated, and interpreted Nahuatl spells and invocations.

In Snake Poems Francisco Alarcón offered his own poetic responses, reclaiming the colonial manuscript and making it new. This special edition is a tender tribute to Alarcón, who passed away in 2016, and includes Nahuatl, Spanish, and English renditions of the 104 poems based on Nahuatl invocations and spells that have survived more than three centuries. The book opens with remembrances and testimonials about Alarcón’s impact as a writer, colleague, activist, and friend from former poet laureate Juan Felipe Herrera and poet and activist Odilia Galván Rodríguez, who writes, “This book is another one of those doors that [Francisco] opened and invited us to enter. Here we get to visit a snapshot in time of an ancient place of Nahuatl-speaking ancestors, and Francisco’s poetic response to what he saw through their eyes.”
The late Francisco X. Alarcón (1954–2016) was an award-winning Chicano poet and educator. He authored fourteen volumes of poetry, published seven books for children through Lee & Low Books, and taught at the University of California, Davis, where he directed the Spanish for Native Speakers Program. He created the Facebook page Poets Responding (to SB 1070) and co-founded Los Escritores del Nuevo Sol / The Writers of the New Sun.

Odilia Galván Rodríguez is a poet, writer, editor, and activist. Her latest book, The Color of Light, is an extensive collection of chronicles and poetry honoring the Mexica (Aztec) and Orisha (Yoruba). She is co-editor, along with Francisco X. Alarcón, of the award-winning anthology Poetry of Resistance: Voices for Social Justice. She has worked as the editor for several magazines, most recently at Tricontinental Magazine in Havana, Cuba, and Cloud Women’s Quarterly Journal online.
“Alarcon's translations deftly capture the flavor of Aztec incantations.”–Gary Nabhan, New York Academy of Sciences

“With his poetry, his activism, and his living/loving, Francisco X. Alarcón taught us that borders are fallacies, violences upon the body politic, the earth, and the human spirit. Even now, Francisco’s words and his legacy build the just and moral pathway we can travel toward one another.”—Sarah Browning, Founding Executive Director of Split This Rock

“Yes: the slender, chiseled lines. Yes: the iconic minimalism. But this trilingual tome unfurls what Galván Rodríguez aptly calls his ‘spirit book.’ It startles me still—this ancestral theology. Best embodied when he sings: ‘my people’s / past is / my staff // my pounding / heart / the only drum.’”—Francisco Aragón, author of His Tongue a Swath of Sky