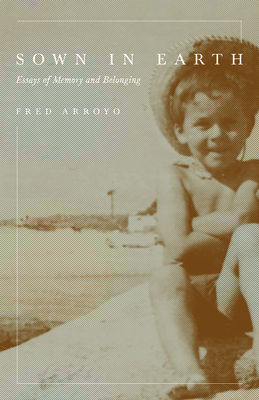 
Available in Warehouse. Wait for Email Confirmation for ETA
Sown in Earth is a collection of personal memories that speak to the larger experiences of hardworking migratory men. Often forgotten or silenced, these men are honored and remembered in Sown in Earth through the lens of Arroyo’s memories of his father. Arroyo recollects his father’s anger and alcohol abuse as a reflection of his place in society, in which his dreams and disappointments are patterned by work and poverty, loss and displacement, memory and belonging.

In Sown in Earth, Arroyo often roots his thoughts and feelings in place, expressing a deep connection to the small homes he inhabited in his childhood, his warm and hazy memories of his grandmother’s kitchen in Puerto Rico, the rivers and creeks he fished, and the small cafés in Madrid that inspired writing and reflection in his adult years. Swirling in romantic moments and a refined love for literature, Arroyo creates a sense of belonging and appreciation for his life despite setbacks and complex anxieties along the way.

By crafting a written journey through childhood traumas, poverty, and the impact of alcoholism on families, Fred Arroyo clearly outlines how his lived experiences led him to become a writer. Sown in Earth is a shocking yet warm collage of memories that serves as more than a memoir or an autobiography. Rather, Arroyo recounts his youth through lyrical prose to humanize and immortalize the hushed lives of men like his father, honoring their struggle and claiming their impact on the writers and artists they raised.

Fred Arroyo is the author of Western Avenue and Other Fictions and The Region of Lost Names: A Novel. A recipient of an Individual Artist Program Grant from the Indiana Arts Commission, Arroyo’s fiction is a part of the Library of Congress series Spotlight on U.S. Hispanic Writers. Arroyo’s writing is also included in Camino del Sol: Fifteen Years of Latina and Latino Writing and The Colors of Nature: Essays on Culture, Identity and the Natural World. In the past decade Arroyo has driven considerable miles along the northern border of the United States, particularly in Ontario, Quebec, and the maritime regions, where he’s camped, walked, canoed, and fished in a real and imagined North Country that’s influencing a new collection of short stories and a book of poems. Arroyo is an assistant professor of English at Middle Tennessee State University.

“Part memoir, part literacy narrative, part nonfiction Künstlerroman, Sown in Earth is all heart. These are deeply moving, eloquent essays about work, about home, about fathers and sons, and about soul-changing transformation. The ‘fire of memory’ races across every page; savor its sweet burn.”—Rob Davidson, author of What Some Would Call Lies

“Sown in Earth: Essays of Memory and Belonging dazzles with its poetry and eviscerates with everything else. The book centers on the author’s father, whose alcohol-fueled cruelty drove me to the edge of loathing. But even as Fred Arroyo lays open the truth about his father, exposing the man’s raw and confounding nature, he circles back around to tenderize that image through closely observed nuance. In the end I, too, am persuaded to believe Santiago Arroyo’s humanity. A stunning and generous work of art.”—Lila Quintero Weaver, author of Darkroom: A Memoir in Black and White

“In this moving and profound recollection, Arroyo explores memory’s functions and its flaws, vividly revealing how a past, both brutal and tender, has shaped him into the person and the writer he is today.”—Blas Falconer, author of Forgive the Body This Failure

“Sown in Earth paints the intricate portrait of the artist as a young Latino, raised in a household ravaged by poverty, alcoholism and violence. What is sown in such stony soil nonetheless cracks the crust to stretch skyward, a trajectory powered by dreams and desires and inscribed in vibrant, lyrical language—writing as transformative as the experiences conveyed.”—Lorraine López, author of The Darling

“As a text for assessing the benefits of working through trauma and of utilising testimony as a means of that working through, this is a necessary consideration. As a text for considering the wider collective memory of the Latino-US experience in the latter half of the twentieth century, this is a vital consideration. Many would benefit from the inclusion of this work on course syllabuses in the future.”—Mark Davis, Memory Studies