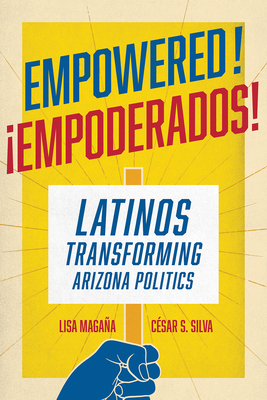 Empowered!examines Arizona’s recent political history and how it has been shaped and propelled by Latinos. It also provides a distilled reflection of U.S. politics more broadly, where the politics of exclusion and the desire for inclusion are forces of change.

Lisa Magaña and César S. Silva argue that the state of Arizona is more inclusive and progressive then it has ever been. Following in the footsteps of grassroots organizers in California and the southeastern states, Latinos in Arizona have struggled and succeeded to alter the anti-immigrant and racist policies that have been affecting Latinos in the state for many years. Draconian immigration policies have plagued Arizona’s political history. Empowered! shows innovative ways that Latinos have fought these policies.

Empowered! focuses on the legacy of Latino activism within politics. It raises important arguments about those who stand to profit financially and politically by stoking fear of immigrants and how resilient politicians and grassroots organizers have worked to counteract that fear mongering. Recognizing the long history of disenfranchisement and injustice surrounding minority communities in the United States, this book outlines the struggle to make Arizona a more just and equal place for Latinos to live.

Lisa Magaña is a professor in the School of Transborder Studies at Arizona State University, where she has worked for more than two decades. She is the author of several books, including Latino Politics and Arizona’s Immigration Law SB 1070, Straddling the Border: The Immigration Policy Process and the INS, and Mexican Americans and the Politics of Diversity.

César S. Silva received his PhD from the School of Transborder Studies at Arizona State University, specializing in Chicano/Latino public opinion and voter turnout, racial and ethnic identity in the United States, elections and campaigns, and Chicano/Latino public policy issues, with a focus on Spanish speakers.

“This study offers a compelling account of how Latinos in Arizona organized and increased their electoral clout to change the landscape of state politics. Through grassroots networks and dogged determination, Latinos successfully pushed back on anti-immigrant and anti-Latino policies and politicians. As the largest ethnoracial minority in the nation, Latinos will continue to command attention as governing structures incorporate (or not) their participation in communities across the country.”—Christine Marie Sierra, co-author of Contested Transformation: Race, Gender, and Political Leadership in 21st Century America

“This book is a fascinating historical account of how Latinos in Arizona have faced political disenfranchisement and outright hostility to their rights and even their very presence in the state and their recent mobilization to push back. It is a book that comes to add substantially to our understanding of how the largest minority in the United States, Latinos, is helping to realign politics—in Arizona, the Southwest, and beyond. This book is a text that shows the reader a microcosm of how minorities have had to struggle to expand political rights through history—first African Americans in the South and now Latinos in the Southwest.”—Tony Payan, author of The Three U.S.-Mexico Border Wars: Drugs, Immigration, and Homeland Security