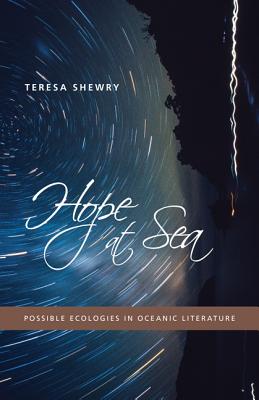 As far back as Thomas More’s Utopia and Francis Bacon’s New Atlantis, the Pacific Ocean has inspired literary creations of promising worlds. Hope at Sea asks how literary writers have more recently conceived the future of ocean living. In doing so, it provides a new perspective on art and imagination in the face of enormous environmental change.

Drawing together ecocriticism, theories of hope, and literary analysis, this book explores how literary writers evoke hope in engaging with environmental upheavals that are reshaping life in the Pacific Ocean. Teresa Shewry considers contemporary poetry, short stories, novels, art, and journalistic pieces from Australia, New Zealand, Hawai’i, and other ocean sites, examining their imaginative accounts of present life and future living in places where humans coexist with environmental loss: rivers that no longer reach the sea, dwindling populations of ocean life, the effects of nuclear weapons testing, and more. These works are connected by their views of a future that includes hope.

Until now, hope has never been theorized in a direct, sustained way in ecocriticism. Hope at Sea makes an argument for hope as a lens for creative and critical confrontation with environmental disruptions and the resulting sense of loss. It also reflects on the critical approaches that hope as an analytic category opens up for the study of environmental literature.

With hope as a critical perspective, Shewry develops a method for reading environmental literature: literary writers create new ways to apprehend existing environmental realities and craft stories about seas, forests, cities, and rivers that could be—not as literal plans but as ways of imagining promising lives in the present world and in the world to come.

Teresa Shewry is assistant professor of English at the University of California, Santa Barbara. She is a coeditor of Environmental Criticism for the Twenty-First Century.

"Teresa Shewry’s Hope at Sea is a rich and informative study of how hope somehow emerges within the embattled contexts of social injustice and environmental destruction."—Stacy Alaimo, University of Texas, Arlington

"The depth of scientific and literary research that underpins Hope at Sea and the convincing argument for the role of the imagination and its creative endeavors in sustaining life, making this a book of great significance."—Australasian Journal of American Studies

"What stands out for me in Shewry’s approach is the copresence of the lyrical, plaintive, yet hopeful sensibility she brings to reading."—The Contemporary Pacific

"This is timely and relevant work that makes a compelling and original contribution to Oceanic, postcolonial, Indigenous, and ecocritical literary studies." —Recherche Littéraire