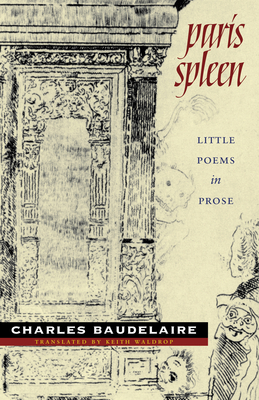 Between 1855 and his death in 1867, Charles Baudelaire inaugurated a new--and in his own words dangerous--hybrid form in a series of prose poems known as Paris Spleen. Important and provocative, these fifty poems take the reader on a tour of 1850s Paris, through gleaming cafes and filthy side streets, revealing a metropolis on the eve of great change. In its deliberate fragmentation and merging of the lyrical with the sardonic, Le Spleen de Paris may be regarded as one of the earliest and most successful examples of a specifically urban writing, the textual equivalent of the city scenes of the Impressionists. In this compelling new translation, Keith Waldrop delivers the companion to his innovative translation of The Flowers of Evil. Here, Waldrop's perfectly modulated mix releases the music, intensity, and dissonance in Baudelaire's prose. The result is a powerful new re-imagining that is closer to Baudelaire's own poetry than any previous English translation.
CHARLES BAUDELAIRE (1821-1867) wrote some of the most influential poetry of the nineteenth century in books including Les Fleurs du Mal and Le Spleen de Paris. KEITH WALDROP is author of numerous collections of poetry and is the translator of The Selected Poems of Edmond Jabes, as well as works by Claude Royet-Journoud, Anne-Marie Albiach, and Jean Grosjean.