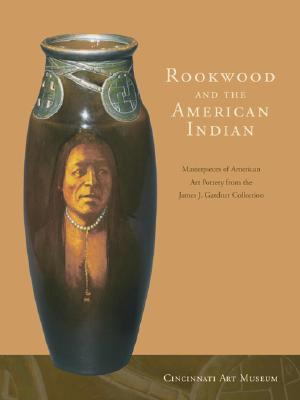 The nation’s premier private collection of Rookwood art pottery featuring American Indian portraiture is on display at the Cincinnati Art Museum from October 2007 to January 2008. Rookwood and the American Indian: Masterpieces of American Art Pottery from the James J. Gardner Collection is a remarkable exhibition catalogue that will be of interest well beyond the exhibition because of its unique subject matter. Fifty-two pieces produced by the Rookwood Pottery Company are showcased, many accompanied by black-and-white photographs of the American Indians portrayed by the ceramic artist. In addition, the catalogue includes a brief biography of each artist as well as curators’ comments about the Rookwood pottery and the Indian apparel seen in the portraits.

The catalogue also presents two essays. The first, “Enduring Encounters: Cincinnatians and American Indians to 1900,” by ethnologist and co-curator Susan Labry Meyn, describes American Indian activities in Cincinnati from the time of the first settlers to 1900 and relates these events to national policy, such as the 1830 Indian Removal Act. Rookwood and the American Indian, by art historian Anita J. Ellis, concentrates on Rookwood’s fascination with the American Indian and the economic implications of producing that line.

Susan Labry Meyn is a consulting ethnologist and an adjunct professor at Northern Kentucky University and the College of Mount St. Joseph in Cincinnati, and the author of numerous articles and a book, More Than Curiosities: A Grassroots History of the Indian Arts and Crafts Board, 1920–1942.

“Whether for collectors of pottery, students of art, or those interested in Native Americans, Rookwood and the American Indian is well worth a place on a personal or institutional bookshelf.“—Ohioana Quarterly

“A fascinating look at how Cincinnati’s European-American population negotiated their relationship with Native Americans…. This examination of the range of conditions surrounding the production of these works of art add new layers of understanding to this art form and the many societies of which it was part and makes Rookwood and the American Indian an absorbing read.”—Ohio History