The Madness of Vision: On Baroque Aesthetics (Series In Continental Thought #44) (Paperback) 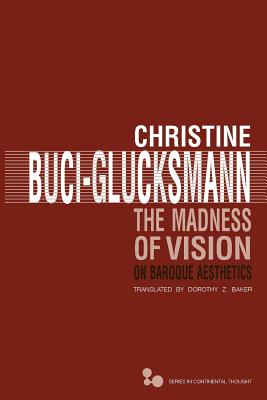 The Madness of Vision: On Baroque Aesthetics (Series In Continental Thought #44) (Paperback)

Christine Buci-Glucksmann’s The Madness of Vision is one of the most influential studies in phenomenological aesthetics of the baroque. Integrating the work of Merleau-Ponty with Lacanian psychoanalysis, Renaissance studies in optics, and twentieth-century mathematics, the author asserts the materiality of the body and world in her aesthetic theory. All vision is embodied vision, with the body and the emotions continually at play on the visual field. Thus vision, once considered a clear, uniform, and totalizing way of understanding the material world, actually dazzles and distorts the perception of reality.

In each of the nine essays that form The Madness of Vision Buci-Glucksmann develops her theoretical argument via a study of a major painting, sculpture, or influential visual image—Arabic script, Bettini’s “The Eye of Cardinal Colonna,” Bernini’s Saint Teresa and his 1661 fireworks display to celebrate the birth of the French dauphin, Caravaggio’s Judith Beheading Holofernes, the Paris arcades, and Arnulf Rainer’s self-portrait, among others—and deftly crosses historical, national, and artistic boundaries to address Gracián’s El Criticón; Monteverdi’s opera Orfeo; the poetry of Hafiz, John Donne, and Baudelaire; as well as baroque architecture and Anselm Kiefer’s Holocaust paintings. In doing so, Buci-Glucksmann makes the case for the pervasive influence of the baroque throughout history and the continuing importance of the baroque in contemporary arts.

Christine Buci-Glucksmann is a philosopher, professor emerita of the University of Paris VIII, and the author of many books in the fields of political philosophy, aesthetics, contemporary art, the baroque, ornament, Asian art, and virtual art. Her most recent works include Esthétique de l’éphémère (2003), Au-delà de la mélancholie (2005), Philosophie de l’ornement: D’Orient en Occident (2008), and Une femme philosophe (2008). Two of her books have previously been translated into English: Gramsci and the State (1980) and Baroque Reason: The Aesthetics of Modernity (1994).