Silence on the Mountain: Stories of Terror, Betrayal, and Forgetting in Guatemala (American Encounters/Global Interactions) (Paperback) 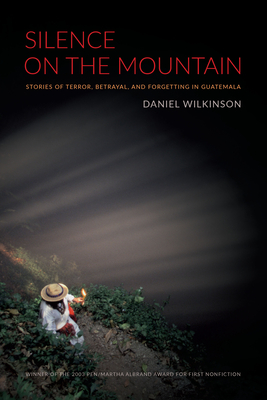 Silence on the Mountain: Stories of Terror, Betrayal, and Forgetting in Guatemala (American Encounters/Global Interactions) (Paperback)


Available in Warehouse. Wait for Email Confirmation for ETA
new in paperback
Silence on the Mountain is a virtuoso work of reporting and a masterfully plotted narrative tracing the history of Guatemala's thirty-six-year internal war, a conflict that claimed the lives of some 200,000 people, the vast majority of whom died (or were "disappeared") at the hands of the U.S.-backed military government. Written by Daniel Wilkinson, a young human rights worker, the story begins in 1993, when the author decides to investigate the arson of a coffee plantation's manor house by a band of guerrillas. The questions surrounding this incident soon broaden into a complex mystery whose solution requires Wilkinson to dig up the largely unwritten history of the country's recent civil war, following its roots back to a land reform movement that was derailed by a U.S.-sponsored military coup in 1954 and to the origins of a plantation system that put Guatemala's Mayan Indians to work picking coffee beans for the American and European markets.

Decades of terror-inspired fear have led the Guatemalans to adopt a survival strategy of silence so complete that it verges on collective amnesia. The author's great triumph is that he finds a way for people to tell their stories, and it is through these stories-dramatic, intimate, heartbreaking-that we are shown the anatomy of a thwarted revolution that has relevance not only to Guatemala but also to countless places around the world where terror has been used as a political tool.