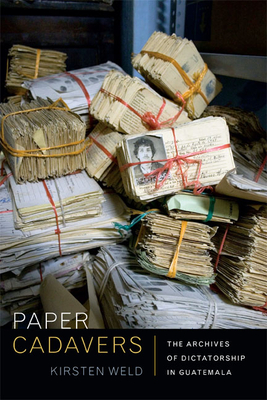 
Available in Warehouse. Wait for Email Confirmation for ETA
In Paper Cadavers, an inside account of the astonishing discovery and rescue of Guatemala's secret police archives, Kirsten Weld probes the politics of memory, the wages of the Cold War, and the stakes of historical knowledge production. After Guatemala's bloody thirty-six years of civil war (1960-1996), silence and impunity reigned. That is, until 2005, when human rights investigators stumbled on the archives of the country's National Police, which, at 75 million pages, proved to be the largest trove of secret state records ever found in Latin America.

The unearthing of the archives renewed fierce debates about history, memory, and justice. In Paper Cadavers, Weld explores Guatemala's struggles to manage this avalanche of evidence of past war crimes, providing a firsthand look at how postwar justice activists worked to reconfigure terror archives into implements of social change. Tracing the history of the police files as they were transformed from weapons of counterinsurgency into tools for post-conflict reckoning, Weld sheds light on the country's fraught transition from war to an uneasy peace, reflecting on how societies forget and remember political violence.

Kirsten Weld is Assistant Professor of History at Harvard University.