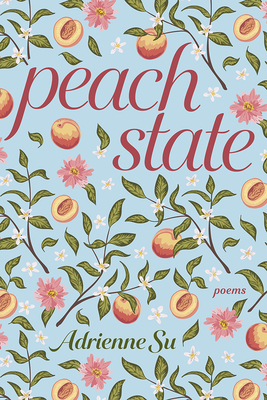 
Available in Warehouse. Wait for Email Confirmation for ETA
Peach State has its origins in Atlanta, Georgia, the author’s hometown and an emblematic city of the New South, a name that reflects the American region’s invigoration in recent decades by immigration and a spirit of reinvention. Focused mainly on food and cooking, these poems explore the city’s transformation from the mid-twentieth century to today, as seen and shaped by Chinese Americans. The poems are set in restaurants, home kitchens, grocery stores, and the houses of friends and neighbors. Often employing forms—sonnet, villanelle, sestina, palindrome, ghazal, rhymed stanzas—they also mirror the constant negotiation with tradition that marks both immigrant and Southern experience.
Adrienne Su is the author of Living Quarters, Having None of It, Sanctuary, and Middle Kingdom. Her poems appear in many anthologies, including four volumes of Best American Poetry. Recipient of a National Endowment for the Arts fellowship, she is professor of creative writing and poet-in-residence at Dickinson College.
“Chinese cuisine is not only about taste but also about creating a fully sensuous experience. In Su’s poems, textures and tang speak to all who crave bittersweet nostalgia.” —Booklist starred review

“An exquisitely textured book. . . . Peach State is so deliciously crafted through food that it makes me wonder why poetry is written about anything else.” —The Millions

“Food is the meeting point between cultures, between generations, between histories, and in Adrienne Su’s Peach State, food is also resistance and survival. In her engaging new collection of poems, Adrienne Su charts the ways that her Chinese American family adapts—and changes—White, Southern culture for its own uses. Su specifically considers how both race and class are powerfully woven into the presentation of the foods we long for and eat, from the names of “exotic” fruits to how “disposable” cuisine hints at how we portray the cultures producing our nation’s take-out.  Peach State is sly, smart and accessible, formally sophisticated and moving. It’s a beautiful, and thought-provoking meditation on food, race, and identity.” —Paisley Rekdal

“In her latest book Peach State, Adrienne Su elevates and honors domestic spaces, especially the kitchen. Su serves up villanelles about chopsticks and chow-mein; a sestina about flank steak; a ghazal about dogs and hotdogs; and a blues sonnet about Buford Highway, famous for its many restaurants. Though Su allows for substitutions (quinoa for rice; Virginia ham for Jinhua ham), there is no substitute for Su’s gracious, accessible voice.” —Denise Duhamel, author of Second Story

“Adrienne Su is one of our best and most readable poets. In her latest book, she offers a rich array of cultural signifiers. With roots in China, but from the American South, she writes with complicated love and wry humor about the fusion of language, food, and family. Elegant, lucid, formally inventive, Peach State is a feast.” —Mark Jarman, author of The Heronry and Dailiness

“Adrienne Su and her poems on the American immigrant experience have done here what they always come to do: remind that the Great American Immigrant is much like the Great American Songbook: you can hear the song again and again and realize that each time it’s something new. That it’s not the song but the singer. That how you hear it changes the way it sounds. That they . . . are you.” —New York Journal of Books


“Evocative, digestible poems take readers on a culinary trip from the Atlanta’s suburbs of Su’s childhood, to the explosive Buford Highway international food scene, all the way to her parent’s China and back again. . . . a love letter to the meals and memories that connect Su to her ancestors, to her parents and her children, to China and to the American South.” —ArtsATL

“Whether grappling with transformations of food, place, ingredients, recipes, identity, or poetic form, Su skillfully navigates the progressions from one form to another, the constants that remain amid the changes, and the moments of freedom and flourishing that exist and thrive alongside and amid constraints.” —Gastronomica