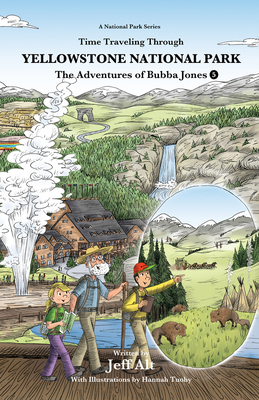 This is book number 5 in the A National Park Series series.

In the fifth book of this award-winning national park series, Tommy “Bubba Jones” and his sister, Jenny “Hug-A-Bug,” uncover amazing facts about Yellowstone National Park while on a mission to solve a park mystery. This is no ordinary brother and sister duo; they are part of a legendary time travel family with a mission to preserve and protect our national parks and they have developed a reputation for solving mysteries. As they time travel back hundreds, thousands, and millions of years, they not only learn about the past but also experience it. They encounter wild creatures and ancient plants. They meet members of the early park expeditions and encounter the U.S. Army who once served as the park stewards. They learn about the Native Americans that call this land home. They learn all about the volcanic activity and unravel some of the park’s secrets. Discover Yellowstone National Park in a whole new way.
Jeff Alt's adventures have been featured on ESPN, Hallmark Channel, in the Associated Press, and more. Alt is a celebrated author and talented speaker. He is the author of Four Boots One Journey, Get Your Kids Hiking, and A Walk for Sunshine. A Walk for Sunshine won the Gold in the 2009 Foreword Reviews Book of the Year awards. It took first place winner in the 2009 National Best Books Awards Sponsored by USA Book News, and won a Bronze in the 2010 Living Now Book Awards sponsored by Jenkins Group. Get Your Kids Hiking won the Bronze in both the 2014 Living Now Book Awards, and the 2013 IndieFab Award in Family and Relationships. Alt is a member of the Outdoor Writers Association of America (OWAA). He has walked the Appalachian Trail, the John Muir Trail with his wife, and he carried his 21-month-old daughter across a path of Ireland. Hannah Tuohy is a children's book illustrator based out of Tulsa, Oklahoma. She attended Oklahoma State University and graduated with a BFA in graphic design, emphasizing illustration. Since graduating, Hannah has illustrated over a dozen children's books including No Sand in the House, Wondering, and The Oyster's Secret. She is also a member of SCBWI. When she isn't busy working on commissions, Hannah spends her time filling up her sketchbook and brainstorming new story ideas with her husband, Justin. The Adventures of Bubba Jones is the first chapter book series Hannah has illustrated.